Let the train take the strain? Not likely! Our new Subaru Legacy Outback long-termer is a far more comfortable and reliable way to commute than the railway system as it clocks up 70 miles a day from north Hertfordshire to London and back. 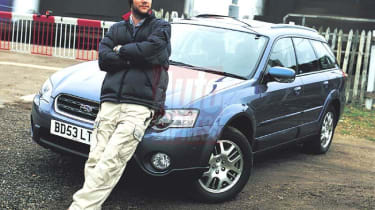 Let the train take the strain? Not likely! Our new Subaru Legacy Outback long-termer is a far more comfortable and reliable way to commute than the railway system as it clocks up 70 miles a day from north Hertfordshire to London and back. The rugged off-roader cum estate car has been with us since December, and has already done 4,438 miles and had a 1,000-mile service to replace the thick running-in oil. This takes an hour and is free. Until the oil change we had kept the revs low, but now we can open up the 162bhp engine and really start using the power. As well as commuting duty, the car has been pressed into service as a DIY support vehicle to lug six heavy flagstones from Cambridgeshire to my home near Stevenage. There's no doubt that the massive boot is one of the Subaru's strong-est features, but it's a shame that the cabin is not as impressively spacious. Although our SE spec model looks smart, its cramped driving position has come in for criticism. While the electrically adjustable seat offers a degree of flexibility, we've found it impossible to get the chair low enough, and the problem is com-pounded by the fact that the adjustable steering wheel can't be lifted as high as we would like. However, we've been much more impressed by the ride, which is supple, the reassuringly strong brakes and accurate steering. What's more, the all-wheel-drive transmission adds extra grip and stability to the already neutral chassis. Despite our confidence in the car's mechanical and structural strength, the plastic wheelarch spats don't appear to be well fitted, and we have still to find a use for the five-speed gearbox's transfer case. Although it's good to have the op-tion of a low-ratio drive, it would be preferable to have a sixth gear, which would improve the car's already impressive 32.2mpg fuel economy. Unfortunately, public enthusiasm for the Out-back is not as strong as mine is, as I have still to see another on the road. Yet in the same period, I've spotted two Ultima kit cars, a new Rolls-Royce Phantom and an original Bentley Continental. Nevertheless, its practicality means the Legacy is in demand at Auto Express, so its life is unlikely to get easier. Stay tuned to see how it fares.