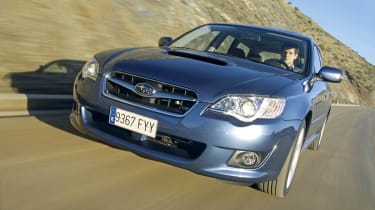 Subaru’s line-up has been crying out for a decent oil-burner – and, at last, it’s here. The world’s first boxer diesel engine impresses with decent cruising refinement, punchy power delivery and excellent economy figures. A six-speed gearbox would be a bonus, but the unit is good enough to attract a whole new range of customers. And if this Legacy is anything to go by, the new Impreza is sure to benefit enormously as well.

Welcome to the golden age of the diesel. Hot on the heels of the world’s first-ever oil-burning supercar – Audi’s R8 V12 TDI (Issue 995) – comes the first flat-four cylinder turbodiesel unit. And it will be no surprise to learn that it’s Subaru which is responsible for the design of this unique powerplant.

The Japanese firm is famous for its petrol boxer units, but the new engine is its first homegrown oil-burner, and one that its range desperately needs.

Available initially in the Legacy Sport Tourer and Outback, the 2.0-litre turbodiesel is expected to be a hugely popular choice, and will account for 85 per cent and 95 per cent of sales of the two cars respectively.

It’s also set to be added to the new Impreza range from the beginning of 2009, where it’s tipped to claim at least 40 per cent of models sold. But why has it taken so long to develop?

While Subaru has more than 40 years’ experience of flat-four cylinder petrol engines – and plenty of turbocharging knowledge, thanks to its Impreza World Rally cars – diesels are another matter entirely. So, the firm started with a clean sheet of paper.

The 2.0-litre diesel is smaller and more compact than the petrol motor, and its turbocharger and catalytic converters are mounted underneath the engine to lower the centre of gravity. These are also fitted directly to the turbo to get them up to operating temperature as quickly as possible.

But how does it perform? To find out, we drove a Legacy Sport Tourer. Producing 148bhp at 3,600rpm and 350Nm of torque at only 1,800rpm, the unit looks flexible and punchy on paper. It delivers only 15bhp less than the Legacy’s main class rival, the BMW 320d Touring, although more importantly, the torque output is higher.

Twist the key, and while some diesel rattle is evident on start-up, the flat-four is smooth and quiet at idle. On the move, there is a little clatter under acceleration, and even a hint of a characteristic Subaru boxer warble beneath the whoosh of the turbocharger above 3,000rpm. But under most driving conditions, the engine sounds like a slightly coarse petrol.

Although we would still say the 320d has the edge when it comes to refinement, with additional sound-proofing and liquid engine mounts, the boxer diesel remains impressively quiet at a cruising speeds.

It’s fast, too, with a 0-60mph sprint time of 8.5 seconds. There’s plenty of turbo-assisted torque, and the car pulls up hills with verve, while offering lots of overtaking ability. The trouble is, you need to be in the correct gear: the standard five-speed box has very long ratios – and a notchy shift, too – which can take the edge off the responses. A six-speed transmission would make the most of the engine’s flexibility; this should arrive within 18 months.

So far, so good, then – and when you take a look at the economy figures, it gets even better. Running costs have always been the Achilles’ heel of boxer Subarus, but not any longer. This Legacy returns nearly 50mpg, while CO2 emissions of 151g/km will mean company car drivers can now put the model on their list of choices.

As for the rest of the experience, the Legacy 2.0 TD is as entertaining as its petrol brother. The four-wheel-drive system brings great stability and traction, while the steering is accurate and responsive, if lacking in feel.

Inside, there’s a decent amount of space and a generously sized boot. And although plastic quality could be better, you can’t argue with the tally of kit, which includes cruise control, climate control and leather trim.

But the plaudits must go to the engine – this unit adds a great deal more appeal to the Subaru badge.