Why produce one facelifted model when you can do two? Not con- tent with overhauling its Forester, Subaru has found time to tweak the Legacy line-up, too. 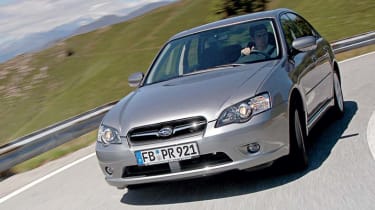 Buying a Legacy is a bold decision. While the sleek looks and charismatic motors hold plenty of appeal, the lack of a diesel engine and the prospect of costly servicing could put some buyers off. But the introduction of a new base model will help counter that; the 2.0-litre Legacy is competent and keenly priced. While the 2.0-litre model is the cheapest in the range, it is also the pick of the bunch. If you are bored of top-selling saloon car rivals, this could be for you.

Why produce one facelifted model when you can do two? Not con- tent with overhauling its Forester, Subaru has found time to tweak the Legacy line-up, too.

A new base model, the 2.0R, is top of the bill, and it is just arrived in Europe with Auto Express first to drive it. The Legacy is powered by a 2.0-litre flat-four engine, which replaces the old 2.5 unit and feeds 163bhp to all the wheels.

Unlike the facelifted Forester, the base Legacy rarely feels underpowered, with its five-speed manual gearbox giving slick, precise changes. A 0-60mph time of 9.2 seconds is nothing special, but in everyday conditions the engine is strong and refined. A new exhaust system helps to make the Legacy quieter, while also improving performance.

Once again, though, running costs are a drawback. Economy is 32.4mpg, but emissions of 207g/km are higher than those from the outgoing 2.0 and 2.5-litre units. Yet at £16,995, this attractive premium saloon will be within reach of Ford Focus hatch buyers.

The 2.0R, available from next month, has climate and cruise control, plus attractive 17-inch alloy wheels. Revised rear lights further enhance the look, ensuring that this is one of Subaru's best-value four-doors ever. The Forester seems overpriced in comparison.