When it comes to leaving a Legacy, Subaru knows what it's doing. However, even the Japanese company's talented team of engineers couldn't resist tinkering with the large family model, and this is the result. 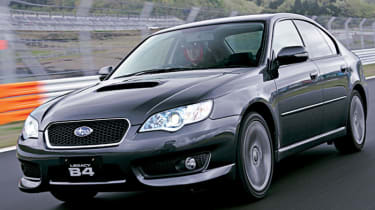 Subtle changes to the bodywork are all that were needed, because there was never much wrong with the original Legacy's styling. While improvements under the skin also sharpen up the big Subaru, its biggest weakness remains: there is still no sign of a diesel engine. However, if you want a fast four-wheel-drive saloon or estate, the Legacy merits some serious attention.

When it comes to leaving a Legacy, Subaru knows what it's doing. However, even the Japanese company's talented team of engineers couldn't resist tinkering with the large family model, and this is the result.

The facelifted Legacy hits UK showrooms later this year, but Auto Express has already had a world exclusive turn behind the wheel at the Fuji Speedway circuit in Japan. Subtle visual changes give more on-road presence, although the Subaru stylists have refrained from wielding the axe too heavily.

A pair of BMW-style headlights flank a larger, more pronounced grille, while there are compact lamps at the back.

Fresh alloy wheels also feature, but the ungainly corporate look which was previewed by the latest Impreza and forthcoming Tribeca SUV hasn't made it to the Legacy. Instead, the focus has been on improving performance and handling - areas in which the current model is already highly accomplished. Under the bonnet, the 2.0 and 3.0-litre boxer powerplants remain unchanged. However, the maker has reworked the exhaust systems to produce a much throatier sound than before.

More important is the highly responsive paddleshift in the top-of-the-range 3.0-litre five-speed auto model. It's not as slick as VW's DSG or BMW's SMG, but it is smooth and efficient.

Subaru Intelligent Drive, or SI-Drive, is another innovation. It debuted at last month's New York Motor Show, and is standard on the flagship model. Using a dial behind the gearknob, the driver can maximise engine performance and efficiency by selecting Intelligent, Sport or Sport Sharp modes.

Put simply, the system controls the electronic throttle response and engine ECU. Intelligent mode reduces the maxi-mum torque and power available - by as much as 50bhp - for crawling in traffic, resulting in an improvement in fuel economy of up to 10 per cent. Sport Sharp brings a quicker throttle response. Thanks to the new exhaust system, the Legacy even feels quicker, although the 3.0-litre still sprints from 0-60mph in around 5.5 seconds.

Meanwhile, the intermediate Sport mode is a fine default setting - so the system effectively provides three engines in one. Enthusiastic drivers will no doubt leave it in Sport Sharp, however, where the Subaru feels most at home.

Responding to claims that the Legacy had gone all soft and mushy, the manufacturer has welded specially designed bracing to the body below the A-pillars and fitted stiffer bushes. The result is exceptional turn-in.

Add precise and superbly weighted steering to the excellent traction available from the four-wheel-drive transmission, and the fastest Legacy of them all is an impressive performer.

Better still, the engineers have also managed to preserve the excellent ride quality. Inside, the level of comfort has been boosted as well. The facelifted model has telescopic steering adjustment, along with a memory-seat function and individual climate controls for front and rear passengers. So, while the newcomer might look only mildly different from its predecessor, Subaru has actually redefined and improved every major part of its family offering. Now that's some Legacy...