It's not only high-performance cars that Subaru is keen to develop for UK drivers. The fast-growing SUV market is becoming increasingly important for the Japanese firm, too. 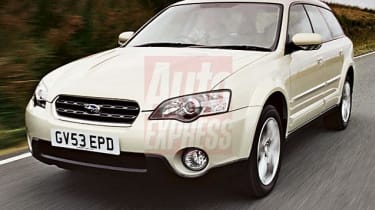 The Outback is certain to impress SUV fans with its practical interior and capable all-wheel-drive transmission. The fact that it looks like a model in its own right, rather than an adaptation of the Legacy Sport Tourer on which it is based, adds real character. A decent offering, which we look forward to testing against rivals.

It's not only high-performance cars that Subaru is keen to develop for UK drivers. The fast-growing SUV market is becoming increasingly important for the Japanese firm, too.

With such huge growth in the de-mand for road-biased 4x4 models and the increasing number of vehicles competing for sales, it's little wonder that the new Legacy Outback is being seen as an opportunity to establish a reputation for practicality for the brand.

Subaru is also keen to take the credit for helping to form the 'allroader' market, which it claims it invented with the original Legacy Outback in 1996.

As with the Legacy Sports Tourer on which it is based, the 2003 Outback marks a major evolution of the original car. Although the outgoing versions were certainly robust, they looked more like standard estate cars, jacked up on stilts to offer greater ground clearance.

The new machine is a much more distinctive piece of work, complete with its own body detailing and colour schemes, alloy wheels and interior trim. Ground clearance has grown from 190mm to 200mm.

On sale in November, from around £24,000, drivers can choose between 2.5 and 3.0-litre engines. But there's no 2.0-litre as Subaru does not consider it powerful enough, and believes it might compromise sales of the smaller Forester estate.

Both manual and automatic gearboxes will be available, and it was the five-speed auto which was fitted to the 3.0-litre flat-six-engined machine that we tried. At idle the unit sounds purposeful, while the raised driving position gives a good view of the road ahead. You can just see the outline of the two bonnet blisters, unique to the Legacy Outback, that help you better judge the size and width of the car.

With 240bhp on tap, acceleration is swift, and the Outback will sprint from 0-60mph in 8.1 seconds. Top speed is 139mph. With the longer springs and dampers, the Outback rides well at low speed. The loftier ride height means it feels softer than the Sports Tourer, but it stays fairly composed through bends.

The steering feels a little lighter too, and the Outback is not quite as eager to turn in. But it should still prove a capable driver's car when compared with rivals such as the Volvo XC70 and Audi A6 Allroad at group test time.

It's not all good news, though, as the gearbox is beset by the same problems that affect the saloon driven in Issue 772. Slow to respond and indecisive, it's not Subaru's finest work.

At higher speeds, the suspension loses some of its composure. But that is unlikely to bother traditional Legacy drivers, who will place its large boot and all-wheel-drive traction ahead of its high-speed handling. With competitive pricing, and the sophisticated new interior, it looks as if rivals could have a fight on their hands. Who said Subaru was a one-car company?