Mention performance Subarus, and most people will think of the rally replica Impreza WRX. The four-wheel-drive saloon has been a huge hit for the Japanese firm, and is very much the definition of the brand. 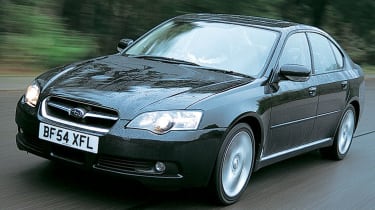 The Spec B is a respectable flagship for the Legacy range, and from the driver's seat it's a fabulous sports saloon. But for some buyers, its plain appearance will be a little too sober. In trying to offer a sporting car that's not as wild looking as its rally-bred siblings, Subaru has been too conservative with the styling.

Mention performance Subarus, and most people will think of the rally replica Impreza WRX. The four-wheel-drive saloon has been a huge hit for the Japanese firm, and is very much the definition of the brand. But for some, the WRX is a bit too extreme to appeal. And that's where the new Legacy Spec B comes in.

Subaru says the new car combines the Impreza WRX's performance credentials with greater practicality and a more upmarket image. Priced £26,500, or £27,500 for the estate version, the new Legacy flagship is pitched head-to-head with rivals such as the BMW 325i and Audi A4 3.0 quattro.

It certainly looks a lot more subtle than other hardcore Subaru offerings. The styling differs little from the rest of the Legacy range, with only a set of smart, polished aluminium alloys distinguishing it from less powerful variants.

Inside, the Spec B gets black leather upholstery, sat-nav, climate control and an electric sunroof. The build quality is exceptional, maintaining the high standard we have come to expect from Subaru. However, the dashboard lay-out lacks the style of European rivals, while some of the plastics used are too shiny. But it's on the road where the new model demonstrates the biggest differences. The Spec B features the Impreza WRX's slick-shifting six-speed close-ratio manual gearbox, mated to a lively 243bhp flat-six engine.

Suspension modifications include upgraded struts and dampers, which are designed to deliver greater high-speed grip, improving on the standard car's already impressive four-wheel-drive chassis. The trade-off is a slightly bumpier ride, but this is a minor criticism, and overall the Legacy is smooth and responsive to drive. It's also remarkably swift and emits a tuneful engine note, while the new gearbox is a real pleasure to use. So, as a driver's choice, the Legacy Spec B fits the bill.

However, from an image perspective, the styling means it's something of a nonentity - a fact that's sure to be reflected in the sales figures.