With its wide wheel-arches and huge spoilers, Subaru's rally-bred Impreza demands plenty of attention. The Legacy, on the other hand, is altogether more subtle. Clad in a handsome body, it plays the role of the practical and reliable compact executive. 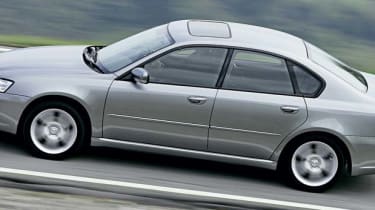 The Legacy has always been a car for those who don't want to follow the herd, but the new 2.0-litre engine could attract more buyers. It's not the most economical unit, but it suits the Subaru's character. Combined with fun handling, a practical interior and low list price, the 2.0R is a quality sports saloon that's great value.

With its wide wheel-arches and huge spoilers, Subaru's rally-bred Impreza demands plenty of attention. The Legacy, on the other hand, is altogether more subtle. Clad in a handsome body, it plays the role of the practical and reliable compact executive.

Marketed as the Japanese firm's answer to the BMW 3-Series and Audi A4, it hasn't sold particularly well - Subaru shifted only 1,800 examples last year. However, with new headlights, slightly flared arches and a new 2.0-litre flat-four engine for 2006, the Legacy is better equipped than ever to tempt prestige buyers.

Fitted to the entry-level 2.0R, the new engine replaces the 2.0 and 2.5-litre units. It generates 163bhp - 27bhp more than before - making it the most powerful non-turbo 2.0-litre in its class. It's coupled to a new close-ratio five-speed manual, and this combination helps drop the base Legacy's 0-60mph time to 9.2 seconds - 1.6 seconds faster, while top speed jumps 11mph to 133mph. On the move, there's decent response at low speed, which continues through the rev range, and the engine feels bigger than its actual capacity. It even sounds better, too - the characteristic rumble has been enhanced by a new exhaust system.

It's a shame, then, that it uses a bit more fuel. The all-wheel-drive transmission and flat-four engine aren't the best formats for economy, but the new 2.0-litre returns around 32mpg combined - about 5mpg less than before. Do a lot of town driving and that will drop below 22mpg. Also, 207g/km of CO2 emissions mean a high 28 per cent tax band for company car drivers.

However, while the 2.0R isn't the most fuel efficient motor, it's a lot of fun to drive. The four-wheel-drive system ensures grip and stability, while direction changes are quick. Even the ride is compliant, despite the large 17-inch alloys. In fact, the only real grumble is the steering, which although accurate, feels too light. Further praise goes to the cabin. It's comfortable, roomy and has better plastics than the Impreza - while the boot is a useful 433 litres. Safety kit is respectable, too, with curtain airbags and electronic brakeforce distribution, while group 11 insurance is lower than for prestige brand rivals.

But perhaps the biggest plus point is the price. At £16,995, the 2.0R is superb value, coming with climate and cruise control, all-round electric windows and a leather Momo steering wheel as standard. For those who like to hide their light under a bushel, there are few better saloons on sale.