Subaru’s diesel is impressive – pity about its thirst. 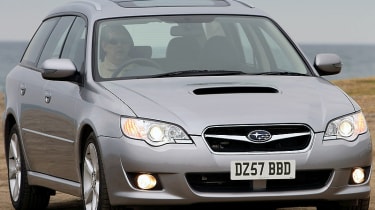 Driving The Legacy is the first car in the world to be fitted with a oil-burning boxer motor. Thanks to careful engineering, the Japanese firm has managed to give the diesel a similar character to its petrol units. It shakes the car to life in the same way and the exhaust note has the trademark burble. It’s impressively smooth, quiet and refined, too. The five-speed gearbox disappoints as a result of ratios that are spaced too widely, especially first-to-second, dropping . Nonetheless, there’s a real sense of mechanical robustness to the Legacy. The suspension is very adept at soaking up punishment, so rough roads pose no problems, and even with a fair bit of steering kickback and road noise at speed, it’s a very likeable car to drive.

Marketplace Subaru’s first-ever diesel was a long time coming. And, aside from a sizeable bonnet scoop and a bootlid badge, there’s little to mark out the diesel estate (for now, it’s only available in the Sports Tourer and Outback) from standard Legacys. Flush-fit glass, blacked out pillars and frameless doors help give it a uncluttered look; it’s not handsome, but individual enough to stand out alongside rivals that include the BMW 3-Series Touring, Audi A4 Avant, Mercedes C-Class estate and Saab 9-3 Sportwagon, as well as the mainstream Ford Mondeo and Mazda 6. It is offered in R and RE trim, with the latter getting electric leather seats and cruise control.

Owning Despite Subaru’s best efforts, interior quality and trim is no match for premium rivals. The layout is cluttered and uninspiring, and even the generous standard kit fails to raise the ambience. There are niggles too, such as the car re-immobilising itself if it’s not started immediately. Rear doors are small and, although legroom and seat comfort are reasonable, it still doesn’t feel spacious. The boot is better, though. There's 459 litres of space with the rear bench up, minimal wheelarch intrusion, and it's easy to load. Up front, it’s comfortable and the raised seating gives a great view out, which is aided by thin pillars and a low shoulder line. However, the the key figure for any diesel-engined car is economy. Officially, it averages 49.6mpg – but, during our tests, it returned a very disappointing 33.6mpg. Retained values should be more impressive though and servicing costs should be reasonable, despite short 12,000-mile service intervals.