Big cat’s fastest-ever coupé is sure to put up a real fight. 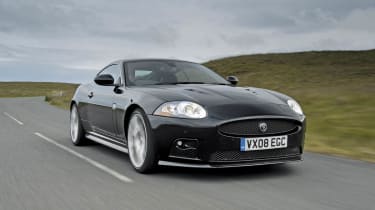 WITH a new owner, a class-leading executive model in the shape of the XF and the kind of badge heritage Nissan can only dream of, Jaguar is on a roll.

The standard XK is a great all-rounder, and was crowned Car of the Year in Auto Express’s New Car Honours 2006. But its focus is more on comfort than out and out performance. The supercharged XKR model turns up the heat a little, and now the limited-edition XKR-S has become the red-hot flagship of the range.

Only 200 are being built, all for sale exclusively in Europe, with 50 destined for the UK. Each is finished in metallic black, and has unique 20-inch alloys, a revised splitter, side sill extensions, a larger boot spoiler and a rear diffuser.

The changes aim to give the XK more aggression, and as many of the extras are in a contrasting colour to the black paint, it works. But whether it’s more attractive than the standard car is debatable.

Ordinarily, the XKR-S would draw crowds wherever it went – but when in convoy with the GT-R and R8, it passed virtually unnoticed. The changes aren’t as subtle inside, with XKR-S branding on the kick plates, dials and mats. Soft fabric rooflining and piano black veneer trim add a luxurious air.

The cabin is well laid out, modern and very comfortable. It feels more special than the GT-R’s, but isn’t as exciting to sit in as the low-slung R8.

However, the Jag is more practical than the Audi. While the rear seats are tiny, they’re useful for storage and the big 300-litre boot has a hatch tailgate.

But in this company, it’s the driving experience that counts. The S rides 10mm lower than the XKR, and has reworked springs, dampers and anti-roll bars. The CATS active suspension system has been retuned, while the steering gets a faster ratio. It all seems promising, and the polished handling and comfortable ride that make the XK great can still be felt. But it doesn’t represent a huge leap forward, and is outclassed here.

While the new Alcon brakes are stronger and the reworked ECU means an increased top speed, the power output is unaltered. Acceleration is effortless, and few drivers will want more pace – the XKR-S covers 0-60mph in 4.6 seconds and has superb in-gear punch – yet traction isn’t as good as in its 4WD rivals. Push the Jaguar on a twisty road and its limitations are clear.

As with Jag’s standard coupés, the XKR-S is a fantastic grand tourer. But it costs £9,000 more than the XKR – and we’re not sure whether it’s worth it!

FINANCIALLY, the new top-of-the-range Jag is rather difficult to justify (see our verdict, left). But in this company, its running costs are far from disgraceful. It was the most economical choice of our three supercars, returning 18.4mpg during its time with us. As the XKR-S has a much more relaxed nature than its competitors in this test, owners are likely to drive it less frantically, leading to further mpg gains. Insurance is particularly expensive, however – even with a tracker security system fitted, a year’s cover will set you back £1,231.