It’s been years in the making. But has supercar been worth the wait? 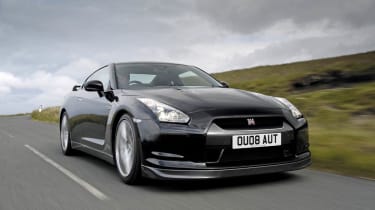 HISTORY means a lot to Japanese supercar makers. As with the Mitsubishi Evo, the Nissan GT-R has a long heritage – it dates back to 1969. But it’s safe to say the latest model is the most extreme of the lot.

After a seemingly never-ending development process, the GT-R has finally arrived in the UK... or at least, Nissan’s first test car has. Although the firm is taking orders – and importers are keen to secure deposits, too – buyers will have to wait until March for delivery.

Few pictures can do the two-door’s design justice. Even our discreet black model has road presence to rival the R8. It fills lanes with ease; few sub-£100,000 supercars are bigger or more imposing.

Drivers can bask in details that hark back to GT-Rs of the past – such as the twin round tail-lamps, which stand out in the dark with their neat circles of LEDs. The entire shape has remained true to the original GT-R Concept seen at the 2001 Tokyo Motor Show.

Pull the retro door handle, though, and you will see that the interior doesn’t live up to the same standards. Too many parts on the dashboard are shared with other Nissan models, and it doesn’t feel particularly special. If you can spot the price difference between the GT-R and the R8 anywhere, it’s in the cabin.

When you press the bright red start button, you feel the weight of expectation that engineers must have experienced throughout the design and development process – everyone expects this car to be fantastic. Engage first gear, push the accelerator pedal – and then let the fun begin!

Our first taste of the GT-R was on a private test track, and flat out, each pull of the steering wheel-mounted paddles brought a lightning fast gearchange and a thrust of acceleration. It’s breathtaking.

Using the car’s automatic launch control, we managed to sprint from 0-60mph in four seconds exactly – but more impressively, it surged from a standstill to 100mph in 9.1 seconds. Despite being more than £24,000 cheaper than either rival, the Nissan is easily the fastest car here.

So, what about the rest of the driving experience? The GT-R has no ordinary all-wheel-drive transmission. For starters, the dual-clutch six-speed box is mounted at the rear to provide the perfect weight counterbalance for the engine at the front. And most of the time, 100 per cent of the torque is sent to the back wheels; the front tyres are only driven when additional grip is required.

As a result, cornering speeds and steering response are even more impressive than the acceleration. Changes in direction are so instant, they make the mid-engined R8 feel slow to react.

Out on the road, the first setting to adjust is the suspension. Three toggle switches on the dash vary the speed of the gearchanges, the stiffness of the dampers and the traction control. The GT-R’s one weakness is its backbreaking stiff set-up – Comfort mode is only just tolerable on most surfaces. In all other respects, the Nissan is as devastating on the road as it is on a track.

Overtaking moves are completed in the blink of an eye, and the sheer acceleration in every gear is enough to give you neckache. The brakes offer huge power, too. We brought the GT-R to a halt from 70mph in 42.8 metres – only bettered by 30cm by the XKR-S.

To go with the thrills, the Nissan has the largest boot here, plus its rear seats are more practical than those in the Jag – although they are still only really large enough for children to travel in comfort.

Nissan has succeeded in making a usable, practical supercar that offers mind-blowing performance for the price of a high-spec executive saloon. Will that be enough to tempt buyers out of more costly class rivals?

Price: £54,200Chart position: 1WHY: The long wait is over. Nissan has held nothing back with the GT-R – so can it topple rivals with heavyweight prices?

THERE’S no cheap way to own a GT-R. You can expect to wear out the unique tyres very quickly, and while servicing costs have yet to be revealed, they are likely to be as high as for the other two cars. Maintenance can only be carried out at one of 10 Nissan Performance Centres across the UK, although delivery and collection to your door is free of charge. Other costs can’t be finalised until the CO2 output is announced next year, when the first models are delivered, but get set for big insurance and tax bills. Economy was also the worst here, with a return of 16mpg.