It’s the class leader for handling. But is it a practical choice, too? 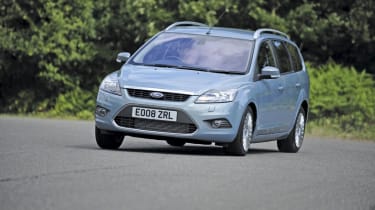 THE designers at Ford know when they’re on to a good thing. There wasn’t much wrong with the second-generation Focus, so its mid-life facelift has been a cosmetic exercise. All they had to do was graft on the stylish new front end shape from the Mondeo and carry out a quick nip and tuck elsewhere.

To our eyes, the Focus estate is one of the best-looking load carriers in its class. It’s fairly conservative, but the vertical rear light clusters and extended roofline are neat and well proportioned – although the roof rails on our car (standard on the Peugeot) are a cheeky £75 optional extra.

Open the tailgate, and the design of the boot isn’t nearly as clever as the Peugeot’s: the 60/40 split-folding rear bench doesn’t slide, and there’s no third row of seats. The luggage area can’t match its rival’s for outright capacity, either – the Focus offers 482 litres with the rear seats in place and 1,525 litres when they’re stowed away. But the neat arrangement sees the seats fold almost completely flat – the rear squabs lift before you collapse the seatbacks – plus, the boot is 130mm wider than the Peugeot’s.

The Focus isn’t fitted with a glamorous panoramic glass roof or opening rear windscreen like the 308 SW, but its cabin has a higher-quality finish. Although both cars feature the latest soft-touch plastics, the Ford feels more solidly constructed – when you drive over bumps, its trim doesn’t creak like the Peugeot’s.

And the Focus doesn’t only have the edge in the passenger compartment. It also outperforms its rival on the road. The revised estate feels substantial and capable from behind the wheel. While the 308 SW drives like an agile MPV, the Focus is closer to a traditional hatchback. Its extended roofline doesn’t seem to compromise its dynamics and the steering provides plenty of feedback. The nose responds immediately when you turn the steering wheel and the suspension strikes a fine balance between comfort and handling. It smooths bumps well, and also has more outright grip than the Peugeot. The stability control plays a less active roll, too – another sign that the car’s chassis is more capable.

On paper, the performance of the Ford’s 134bhp 2.0-litre TDCi diesel appears closely matched to the Peugeot’s HDi. But on the open road, it is faster and more responsive – from a standing start and in-gear. While both use the same engine, the Focus’s superior gearbox makes it more relaxed at cruising speeds.

So the Ford clearly has the dynamic advantage. Is that enough to put it ahead of the more flexible Peugeot in this test?

Price: £19,700Chart position: 2WHY: Spacious Ford gets fresh front end, and is powered by a fast, responsive 2.0-litre diesel.

THE lighter Ford should have trumped the Peugeot for fuel economy, but in our hands, it proved to be the thirstier car of the two. And there’s more bad news when it comes to maintenance costs, largely because services need to be carried out more frequently on the Focus, at 12,500-mile intervals. Still, the top-spec Titanium Estate holds on to more of its value – a residual figure of 38.3 per cent makes it a relatively safer place for your money. It also has an advantage in terms of insurance premiums, while the marginally lower CO2 emissions mean annual road tax and company car tax bills won’t be as expensive.