Saloon has slippery shape to improve emissions and fuel returns 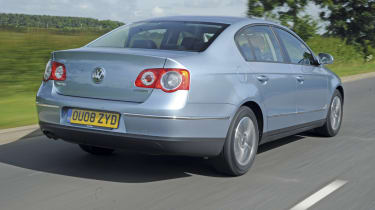 When Volkswagen revealed its ultra-economical Polo Bluemotion in 2006, it kick-started a trend for fuel-sipping, low-emission motors. Now the German firm has been joined by Ford, SEAT and Skoda in launching branded green versions of its standard models, while Kia, Hyundai and Volvo have their own cars in the pipeline.

The Passat is the third model in VW’s line-up to get a Bluemotion makeover, following on from the Polo and Golf. As with the Mondeo, it takes a subtle approach to advertising its intentions, with the only external clues being small Bluemotion badges on the grille and bootlid.

This means the VW still conveys an upmarket air, thanks to neat details such as its prominent chromed nose, jewel-like rear lamps and elegant 16-inch alloy wheels.

Sadly, the premium feel is dented once you climb aboard, as VW has given the Passat a sparsely trimmed cabin. The driver’s centre armrest has been ditched, leaving an unsightly plastic cubbyhole, rear passengers get manual window winders and the neat sliding coin trays in the dash have disappeared.

Yet the Bluemotion still tips the scales at 1,422kg. That’s 83kg – or one adult passenger – less than the Ford, but no lighter than the equivalent standard Passat.

Despite a new hi-tech turbocharger, diesel particulate filter and taller ratios for the five-speed gearbox, the clattery 103bhp 1.9 TDI unit could only return 39.4mpg. This is a figure easily matched by the newer and more powerful 2.0 TDI unit available in more luxurious Passats.

Carbon dioxide emissions go up as fuel economy goes down, but drivers still benefit from the official CO2 output of 136g/km, which places the Passat into tax Band C. On paper, the performance of the VW appears to be no match for the more powerful Mondeo. But in reality, the German car feels responsive to accelerator inputs, and at the test track it posted an identical time of 10.6 seconds for the 0-60mph sprint. Only the 10.9 seconds it takes to accelerate from 50-70mph lets it down and highlights the tall top gear.

As with the Mondeo, the VW gets sports suspension as standard, which is lowered by 15mm at the front and 8mm at the rear. It improves the car’s high-speed aerodynamics and helps lower the drag factor from 0.29 to 0.27Cd.

Another benefit of the stiffer set-up is that the Passat is nearly as agile as the Ford, although it lacks its rival’s steering feedback and sharp turn-in. The ride is comfortable and refinement excellent, making the big VW an effortless long-distance cruiser.

By combining similar economy and emissions with a lower price, the Passat should have a decisive advantage over the Ford. However, we’re not entirely convinced that the benefits of its green technology are a step forward from other diesel variants – or will pay off in the real world.

FOR a big family saloon, the Passat should be relatively inexpensive to run. Fuel consumption of 39.4mpg is respectable for a car of this size, while a Band C tax rating means you’ll have to spend only £120 a year for a road fund licence. Variable mileage servicing should help ease the cost of maintenance, especially as the check-ups are likely to work out cheaper than those of the Ford, which has relatively short 12,500-mile intervals. As with all Passats, the Bluemotion makes a lot of sense when the time comes to sell. After three years of ownership, the VW will retain 43.5 per cent of its value, meaning you should get back £7,523.