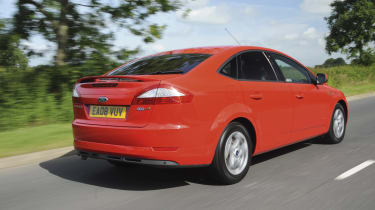 Unlike many eco models, the Mondeo doesn’t shout about its credentials. From the outside, the ECOnetic could be mistaken for any other version in the line-up. It even does without an aerodynamically tuned bodykit, as seen on the Focus.

Instead, Ford’s engineers have concentrated on cleaning up the airflow underneath the car. In fact, the only giveaway to the five-door hatch’s status is the neat tailgate-mounted spoiler and a small ECOnetic badge at the rear.

Elsewhere, the car gets flush wheel covers for its 16-inch steel rims (our test car rode on optional alloys) which are fitted with special low-rolling resistance tyres.

Inside, the cabin is just as spacious and well built as any other Mondeo. There’s plenty of standard kit, and opening the hatchback reveals a 528-litre boot, which easily trumps the 485 litres of the four-door Passat. The biggest changes are to be found under the skin, where the mechanicals have been tweaked to boost economy and reduce emissions. Longer gear ratios and low viscosity oil are used in the five-speed box, while the 123bhp 1.8-litre turbodiesel engine gets a particulate filter in the exhaust.

So, do these changes add up to a big family motor with small car running costs? Not quite. In our hands, the ECOnetic returned a respectable 41.5mpg, bettering the VW by more than 2mpg. However, the figure is some way short of Ford’s combined claim of 53.3mpg.

What can’t be argued with are the Mondeo’s official CO2 emissions. At 139g/km, the ECOnetic shaves 10g/km from the standard oil-burner, dropping it into Band C with an annual road tax bill of £120. On the road, it won’t leave its driver feeling short-changed. As with all Mondeos, it has an excellent chassis, with a composed and refined ride, sharp steering and agile handling, courtesy of the standard-fit sports suspension.

Only the skinny, low-rolling resistance tyres give cause for concern. With less grip, they mean the ECOnetic needs more than 51 metres to stop from 70mph. The special rubber also seems to affect the handling more than it does in the lighter Focus.

Performance is surprisingly strong though, with the 1.8-litre TDCi unit feeling smooth and punchy once the turbo comes on song at around 1,800rpm.

Compare the bonnet badges of our two family cars, and you would expect the premium VW to come with the steeper price tag – but you’d be wrong. Surprisingly, at £18,745, the five-door Mondeo actually costs £1,450 more than the four-door Passat. A glance at the price lists shows where your money goes. The Mondeo comes with Bluetooth phone connectivity, electric rear windows, a leather steering wheel, electric seat adjustment and front foglamps as standard – all features that you’ll have to pay extra for in the VW.

The question is whether the Ford’s depth of abilities and compromise-free approach to fuel saving can justify the extra cost over the classy German.

Price: £17,295Model tested: Ford Mondeo ECOneticChart position: 1WHY: Green version aims to be as good to planet as it is to drive.

Driving an eco-friendly family car will be just as much about lowering emissions as it is about saving money for many buyers. As with the Passat, the Mondeo ECOnetic didn’t manage to break the 40mpg barrier, yet its low tax grouping keeps company car payments and VED fees down. Residual values for the ECOnetic variant are yet to be estimated. However, the Ford tends to lose its value faster than the Passat in standard form. Servicing bills are also pricier. More concerning are your Driver Power survey verdicts, which paint a poor picture of Ford’s 781 dealerships. Insurance quotes for both models are virtually identical.