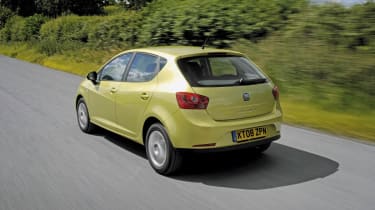 With its latest Ibiza, SEAT is hoping to get into the supermini premier league. While the outgoing car was a sensible choice for those after low prices and running costs, the hard ride and dull interior held it back.

To give the newcomer the boost it needs, the firm has pushed its way to the front of the queue for the Volkswagen Group’s latest technology. The Ibiza benefits from the German giant’s all-new supermini platform ahead of the next Polo.

If that wasn’t enough, the car was penned by an ex-Lamborghini stylist – in the shape of SEAT’s design chief, Luc Donckerwolke. So it should be a real sight to behold. But while it’s based on the great-looking Bocanegra concept, which was revealed at the Geneva Motor Show in March, we’re disappointed with how the road-ready five-door has turned out. The front end is unmistakably more distinctive than the outgoing Ibiza’s, and the angular headlamps and small grille look especially sharp. But as you move further back from the nose, the design is less convincing.

A pronounced slash in the doors is the only flourish in a profile which is very similar to that of the Kia Cee’d. At the rear, the Ibiza’s size is emphasised by its tiny light clusters.

The car measures a substantial 99mm longer than before, although the wheelbase has grown by only 7mm – so the overhangs are much larger. That helps to make the SEAT the biggest car in our group. Inside, the cabin design is less radical, but we’re not big fans of the light-coloured trim in our test car. The dashboard looks smart enough – it’s just that the beige materials provide it with a low-rent feel.

Still, up front the cabin is much more airy than the previous generation’s. The seat is mounted lower than before, and the driving position is spot-on. Rear space isn’t quite as impressive, though; tall occupants will find headroom is in short supply and the SEAT’s 700mm legroom figure is the tightest here.

The big boot compensates for this – the SEAT’s 292-litre capacity with the seats in place is more than any rival in this test can muster. Lift the rear seat squabs and fold the basic split backrest, and the space increases to 847 litres. SEAT boasts about the fact that the Ibiza was developed in just under two years, using the latest computer simulation software. But out on the road, it doesn’t feel as if the package was rushed.

Initially, it’s easy to be underwhelmed by the car’s abilities, as it doesn’t rewrite the rule book in any one area. Only over a long drive does it reveal its strength in depth; this is a highly capable car in all conditions.

The Ibiza’s steering offers more feel than all but the Mazda 2 here, while the ride is smoother than the Corsa’s. What’s more, the SEAT shows real composure when cornering at speed, retaining the outgoing model’s sporty character with an extra helping of maturity. Initially, the SEAT will be offered with three engines: an entry-level three-cylinder 69bhp 1.2, the 83bhp 1.4-litre unit in our test car and a 104bhp 1.6-litre. More powerful petrol models and TDI diesel motors will be added to the line-up later.

The mid-range 1.4 proved a strong performer in our tests, offering decent low-down torque and enough power to keep pace with rural traffic. Economy and emissions are less impressive in this company. But when you consider the tempting prices – the five-door starts at only £8,995 – the Ibiza is ready to take the challenge to the class leaders.

Bargain prices were key to the old Ibiza’s appeal, and buyers on a budget will be attracted to the new model, too. It’s the second cheapest car in our test, despite being the biggest. A high CO2 output places the SEAT in the 17 per cent tax bracket – bad news for company car drivers. And while overall fuel economy was good, it’s worth noting that when driven hard at the test track, the SEAT’s returns deteriorated more than any other model in our quartet.