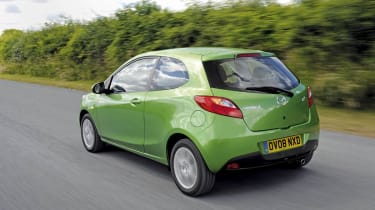 Doing things differently has become a habit for Mazda. The firm persists with its unique rotary engines, and while most cars get bigger and heavier, the latest 2 is smaller and lighter than its predecessor. It’s also one of the most stylish superminis around – so if looks are your priority, the new three-door version is an obvious choice. It’s just hit UK showrooms, with a minimal compromise in practicality over the five-door.

The car isn’t as distinctive as the Ibiza, yet appears sharper. Its sleek profile, smart headlamps and striking rear light clusters all look great when combined with our model’s £350 optional metallic paint.

The Mazda is small, too – 167mm shorter than the SEAT, to be precise. Of course, this impacts on luggage space: the 250-litre boot is the least useful in this test. It extends to 787 litres if you fold the rear seats, but the tapered roofline and sloping rear screen reduce the space available.

Climb inside and you’ll be pleasantly surprised, as the cabin is spacious. There’s more legroom in the back than any of the bigger cars here can offer, while the interior is attractively styled and simply laid out.

There is a catch, though. Mazda’s choice of materials has once again let it down –  they are simply not good enough. Hard plastics dominate the sombre dash, and its drab black finish is at odds with the cheeky exterior and fun dials. While it’s all solidly put together, the cabin is disappointing.

Out on the road, the 2 redeems itself. As it has less weight to haul around than its rivals, the three-door is agile and changes direction quickly. The firm suspension controls body roll well and gives the most driver appeal. Yet none of this comes at the expense of comfort, as the Mazda is refined at speed and composed on uneven roads.

Its light controls are also perfect in town, and the lively 1.3-litre engine gives decent pace. The 85bhp unit has the lowest torque output, at 122Nm, but as it has only 950kg to shift, it’s responsive and economical.

Drivers will love the short-throw changes from the high-mounted gearlever. It makes shifts a pleasure, and gives the 2 a sporty feel that no rival can match.

It’s not perfect, though; the brakes lack initial bite and ultimate stopping power. In our test it took 40.1 metres to come to a halt from 60mph – the worst by 3.3 metres.

Even as a five-door the 2 undercuts its rivals, so it’s no surprise the three-door is the cheapest car on test. The question is whether the limited practicality costs the Mazda.

One thing the Mazda has on its side is its price – it undercuts every rival in this test. That’s partly because our test car has only three doors, although a five-door with an identical spec still costs only £10,009. Just bear in mind that not many options can be added to the basic cabin. The 2 is the best car to drive here, and also the most frugal... albeit only just. Servicing costs are low, too, while the Mazda’s insurance quote can’t be bettered by any competitor.