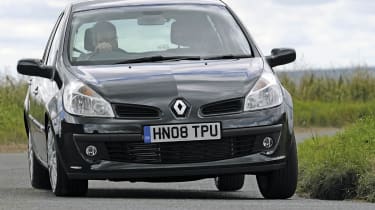 Ever since Papa and Nicole first appeared on our television screens in 1991, the Renault Clio has been a smash hit. The father and daughter duo, who featured in a string of successful ads, disappeared long ago – but the French baby is still in business. Now in its third generation, the supermini is bigger and better than ever. So how does it rate against a host of younger rivals?

Even though it’s so well established, the Renault hasn’t dated, with its large headlamps, pretty alloy wheels and neat proportions. At launch, it was one of the biggest cars in its class, although in this test, only the Mazda is shorter.

Not that you need to worry about interior space, because the Renault has the most roomy cabin and a competitive 288-litre boot capacity. And it’s not only big – interior quality is among the best in this test, too. Dynamique trim brings a classy soft-touch finish to the dashboard, while the simple controls and smart design provide the Clio with a grown-up feel inside to match the Corsa’s.

That’s not to say it’s perfect; the steering column adjusts for rake only (strangely, reach movement is packaged with Renault’s optional £275 keyless entry system). Also, the switchgear for the ventilation controls is cheap compared to the rest of the cabin.

Hit the road and you might expect the Clio to lose ground to its rivals as it has the smallest-capacity engine on test. But the new 1.2-litre TCE unit – which replaces the previous 1.4 – is fitted with a turbo, which boosts power to 98bhp. And that makes the Clio the most powerful car of our quartet.

It also has the most torque, and at the test track, it sprinted from 0-60mph in 11.5 seconds. While that’s only one-tenth and two-tenths-of-a-second quicker than the Mazda and SEAT respectively, the gap in performance feels even greater on the road than it appears on paper. This is reflected in our in-gear figures. Once up to speed, the quiet petrol engine is also smooth and responsive across the rev range. As a result, the Renault is the best choice for long distances, with plenty of performance in reserve on motorways. In our hands, the car returned 37.9mpg, too.

The Clio upholds the brand’s strong reputation for ride comfort. Its supple suspension does an impressive job of absorbing bumps and ruts.

But this doesn’t come at the expense of the handling, because the supermini is agile, has lots of grip and responds sharply to steering inputs. The electric set-up has an artificial feel, but it’s precise and light, which makes placing the Renault on the road a simple business. Completing the impressive dynamic package are the strongest brakes here.

So the oldest design in our line-up is still remarkably fresh. Has it done enough to beat the younger upstarts in our test?

Price: £11,995Model tested: Renault Clio D’miqueChart position: 1WHY: First of the new breed of superminis is as strong now as it was at launch three years ago.

The Clio is the second most pricey model on test, but justifies this with an advanced engine and grown-up cabin. That doesn’t help residuals, however. In three years’ time, our Dynamique will be worth only £4,666. Fuel economy was competitive in this group, and suffered less than others here when the car was driven hard. Services are expensive, and Renault showrooms haven’t fared well in our Driver Power dealer surveys over the years.