Can SEAT’s new Ibiza make waves in the supermini class? We find out as it meets Mazda, Vauxhall and Renault rivals. 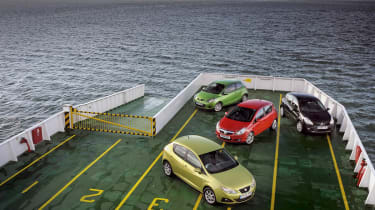 SEAT has embarked on a journey into the unknown with its new Ibiza. The firm is fed-up with its supermini being the quirky option in the class, so the latest model to be named after the White Isle is bigger than most rivals. Will that be enough to outmanoeuvre the rest of the fleet in the choppy waters of the small hatchback sector?

We climbed on board with a trio of its toughest competitors and headed for our very own Isle of Wight to find out...

Fresh off the boat from Spain, the Ibiza goes on sale this week. It has a bold new look, and is the first car to use the Volkswagen Group’s latest small car platform.

While the Ibiza has never been bigger, Mazda has taken a very different approach with its supermini offering. The 2 is smaller than its predecessor, and the stylish, lightweight hatch is all about looks and driver enjoyment – attributes the new three-door version brings into sharp focus.

Vauxhall supersized its supermini when it launched the latest Corsa, and with a wide range of petrol and diesel, three and five-door variants to choose from, it’s still the one to beat in its class.

The old stager in this line-up is the Renault Clio. It has been around for three years, but with the benefit of some new engine technology, the French model is just as strong as ever.

So the big question is, can the new Ibiza make a splash in such accomplished company as it arrives in the UK?

It's difficult to buy a disappointing supermini. One thing we learned here is that the small hatchback sector is stronger than any other in the UK. And that means any of these cars could take victory.

The Vauxhall Corsa is the most grown-up of the lot, with a high-quality, big car feel that no other supermini can match. Its overall line-up remains the finest in the class, although the 1.4-litre petrol model is the weakest of the lot.

That’s why this version has been bettered by the new Ibiza. We’re not convinced about the SEAT’s styling or parts of the cabin design, yet have no complaints with the driving experience or prices.

The Mazda 2 grabs second place. An Auto Express favourite, it’s great fun to drive, attractively styled and surprisingly spacious even as a three-door.

However, on this occasion, the Mazda can’t quite match the Clio – which seizes the victory mainly thanks to its fantastic new engine.Basic petrol models benefit from the punchy turbo unit, so never feel like poor relations of diesels. Add great looks, a smooth ride and tidy handling to the mix, and this Renault is the pick of the bunch.