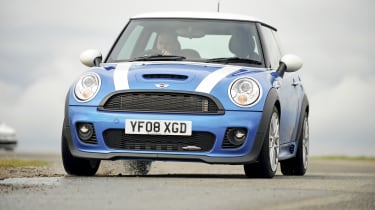 But the fastest-ever MINI can’t rest on its laurels. In fact, to see off the new Scirocco it will have to call on all its reserves of performance, dynamic driving ability and charm. And first impressions are good. Thanks to its wheel-at-each-corner stance, aerodynamic bodykit, bonnet-mounted air scoop and large twin exhausts, the JCW has the tough look of a true hot hatch.

The trouble is, the basic shape is a victim of its own success – there are so many MINIs on UK roads that the JCW doesn’t turn as many heads as its sleek rival. It also trails in terms of versatility – it can’t match the VW’s practicality, no matter how much more inviting its design is. Although the JCW is technically a four-seater, you wouldn’t want to be sitting in the cramped rear for too long. While headroom is adequate, legroom is virtually non-existent. Luggage capacity is equally compromised, lagging far behind the space offered by the Scirocco.

There’s better news for those travelling in the front seats, where there’s bags of room. And although the VW has the more eye-catching exterior of the two models on test, the MINI cabin scores on style. Retro touches like the large central speedometer, chromed console-mounted switches and aluminium-finish pedals add further to the car’s appeal.

To really understand the attraction of a JCW, though, you have to hit the road. Press the starter button and the turbocharged 1.6-litre engine burbles menacingly into life. Incredibly, despite having a 400cc disadvantage – the VW’s capacity is 2.0 litres – the 208bhp unit in the MINI is the more powerful of our pair.

At the test track, it played this trump card to outstanding effect, completing the sprint from 0-60mph in only 6.2 seconds. That’s half-a-second faster than the Scirocco, while the JCW’s in-gear acceleration times were even more impressive. The sharp steering, strong grip and clever electronic limited slip differential make the MINI incredibly quick.

It’s full of character, too. Accelerate hard, and torque steer causes the steering wheel to writhe in your hands, while the large exhaust tailpipes pop and crackle with every prod of the throttle. The MINI doesn’t have the finesse of the VW, but it’s far more fun – and is clearly the choice for keen drivers. The question is whether this appeal is stronger than that of the more rounded Scirocco.

Take a look at the list price and the MINI is hardly off to a great start. Not only is it more expensive, but the costly options would soon add up if you were to match the VW’s standard equipment list. In other respects, though, the JCW makes much more financial sense than its rival. First, there’s the excellent tlc service package, which costs a bargain £150 for five years’ routine maintenance. What’s more, as the MINI makes the most of parent firm BMW’s EfficientDynamics tweaks, it returned 32.4mpg in our test. Official CO2 emissions of 165g/km place it in road tax band D. Both are remarkable figures, given its enormous performance potential.