How does reborn legend fare when viewed as a hot hatch? 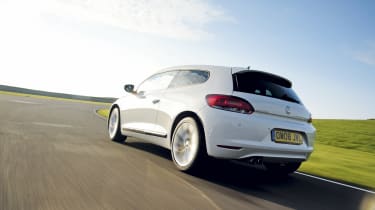 ince the Scirocco blew into the UK last month, it has left us impressed and a little confused. It has plenty of visual impact, and on the road, sharp responses and strong performance make it a terrific choice for keen drivers.

But with less rakish looks than rivals and a bland if practical Golf-derived cabin, the VW doesn’t have the sense of occasion to make the grade as a great coupé. Consider the Scirocco instead as a hot hatch with added style, and it starts to add up.

In the company of traditional pocket rockets, the VW stands out. The swept-back headlamps, bulging rear arches and upright tail give the car greater road presence than the smaller, more familiar MINI. Sadly, the Scirocco’s interior is nowhere near as distinctive. Sitting at the wheel, you could be in a Golf or an Eos. The quality of the materials and finish is excellent, but the feelgood factor of a coupé is missing. Still, the driving position is perfect, the heavily bolstered sports seats are supportive and the chunky three-spoke steering wheel is great to hold.

What’s more, the VW is genuinely practical, beating the MINI for space and versatility. Although it’s a strict four-seater, there’s easily enough room in the rear for two adults. Lift the hatchback-style tailgate and carrying capacity is 292 litres – nearly twice as much as in the JCW. Fold the 50/50-split rear bench and space increases to 755 litres, giving it a 75-litre advantage.

In the tradition of a true hot hatch, the Scirocco mixes this practicality with performance. While the MINI proved quicker at the test track, in the real world, there was little to separate our duo. The VW’s 197bhp 2.0-litre turbo engine is punchy and responsive, and gives strong overtaking pace. The car is also a refined motorway cruiser, even if it doesn’t offer the same whizz-bang drama of the MINI.

It’s when you turn into a corner that the Scirocco comes into its own. The hi-tech Adaptive Chassis Control system gives the VW strong grip and great poise through a series of bends. Selecting Sport mode makes the ride firmer, while sharpening steering and throttle response.

The VW isn’t quite as involving or exciting as the MINI to drive. Instead, the real strength of the Scirocco’s appeal lies in its devastating cross-country pace, whatever the weather. The question now is whether the balanced blend of talents is enough to help the new car topple the more characterful MINI.

Price: £20,940Model tested: VW Scirocco GT 2.0 TSIChart position: 2WHY: Having proved itself against coupé rivals, can the Scirocco match a hot hatch for fun and practicality?

Step into a VW showroom and the Scirocco’s price will be as much of a draw as the design. It costs £20,940, and is far better equipped than the MINI, which is £45 dearer. The coupé is only £90 more than the less glamorous Golf GTI, too. Residuals are excellent, with the car retaining an incredible 59 per cent of its value after three years. But servicing is a lot pricier than for the MINI, with the first three scheduled check-ups costing you £430 more. The VW was thirstier at the pumps, too, returning 25.7mpg in our hands. CO2 emissions of 179g/km puts it in road tax band E, which means a £170 annual bill.