By radically overhauling the Granada’s mechanicals, engineers at the firm completely altered the model’s character. 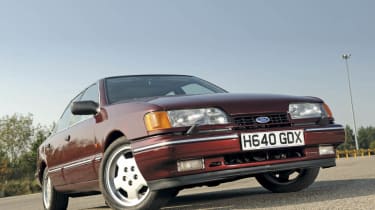 Think of a fast Ford, and perhaps the last thing that will spring to mind is a Granada. Launched in 1985, the third generation of Ford’s executive was famed for its comfort, refinement and cosseting ride. However, with a range of underpowered motors and a soggy chassis, it was slow and cumbersome on the road. It’s no surprise it soon became known as the ‘Grandad’.

But the old timer got a new lease of life in 1991 when legendary engine builder Cosworth stepped in. By radically overhauling the car’s mechanicals, engineers at the firm completely altered the model’s character.

The rough and slow-revving 2.9-litre V6 received double overhead camshafts, 24 valves and a boost in power from 150bhp to 195bhp, while the suspension was lowered and stiffened. You’d struggle to spot the changes from the outside, though. Larger 16-inch alloy wheels, an oval tailpipe and a small 24v badge on the boot were the only visual clues.

But from behind the wheel, the transformation was obvious. The Granada now scorched from 0-62mph in 8.8 seconds and had a top speed of 140mph. Better still, the big Ford was composed in corners. The end result was that it became a cut-price alternative to thoroughbred sports saloons from BMW and Mercedes.

Vote for your favourite fast Ford here, in our exclusive reader survey