Can Spanish firm succeed with reworked version of Audi A4 saloon? 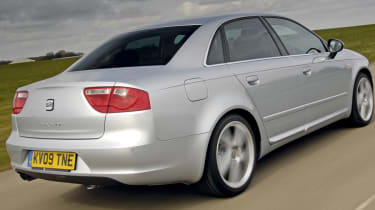 Think the Exeo looks familiar? It’s bound to. Opportunities to change the old Audi A4 blueprint were limited, as there were only 18 months between the announcement of the project and the first car rolling off the line.

SEAT shifted the entire production line of the previous A4 from Germany to Spain on 1,200 lorries, and it shows. In profile, the Exeo is virtually identical to the Audi – a new grille and headlights do little to disguise the car’s German roots.

At the back, the number plate sits lower on the bumper, while the SEAT logo doubles as a boot lever. Yet although the Spanish firm’s styling details have all been neatly integrated, they can’t hide the dated proportions that underpin this saloon.

It’s a similar story inside, where the dash is effectively lifted from the A4 Cabriolet. Still, you get decent Audi-quality switchgear and trim, all logically laid out. Overall, the cabin is a pleasant place to spend time, even if it’s not at the cutting edge of design.

Our test car was a Sport model, which has more supportive seats. They are comfortable, and the driving position is excellent.

Rear passenger space falls a long way short of the class leaders, although the boot is 82 litres bigger than that of the IS 220d. While the Exeo’s saloon body compromises its family car credentials, SEAT claims the car will appeal to motorists who rate driver appeal ahead of outright space.

The engine options help its argument, because the Exeo features the latest VW Group common-rail TDI units. The 2.0-litre is available with up to 168bhp, but our 141bhp entry-level version is 34bhp and 80Nm down on the 175bhp Lexus.

Compensation comes from the engine’s punchy power delivery. And, as the Exeo is a considerable 225kg lighter than its rival, its performance is far from disappointing. At the test track it was only half-a-second slower from 0-60mph, with a time of 9.7 seconds.

And while the Lexus held the advantage through the gears, the Exeo’s broader spread of power made it feel equally flexible. The SEAT’s six-speed manual box was far smoother than the IS’s, too.

That’s not all, as the VW Group diesel engine is the more refined unit, even if the Spanish machine can’t match the Lexus for isolating road and wind noise.

Firmer suspension is a no-cost option on Sport models, and this set-up was fitted to our car. The more focused chassis strikes a good balance between performance and comfort – it doesn’t crash over rough surfaces, and body control is excellent.

So, the Exeo feels like an old A4 with a more modern engine. It’s a bit dated inside and out, yet is good to drive and built well. While it lacks the prestige of a Lexus badge, it compensates with much broader talents.

Chart position: 1WHY: A fresh look and hi-tech diesel breathe new life into the old Audi A4 package on which SEAT has based its latest saloon