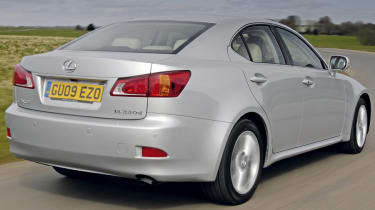 In the image-obsessed compact executive car market, Lexus is an established presence. That means the IS 220d has more car park kudos than the Exeo – although it doesn’t shout about its intentions.

On the outside the styling is neat, if anonymous, and in SE trim it doesn’t look as sporty as our Exeo. The Lexus is shorter than its rival, but has a longer wheelbase, which provides a squat stance.

Boot capacity is limited to 378 litres and rear seat access is restricted compared with the Exeo’s. Headroom in the back is at a premium for tall passengers and up front, there’s only a limited range of seat and steering wheel movement, making the interior feel a little claustrophobic.

The dashboard is well laid out, though, and while its design offers little in the way of character, quality is excellent and there’s plenty of upmarket appeal. Thanks to superb insulation and sleek aerodynamics, road and wind noise are both minimal.

The excellent cabin refinement emphasises the engine’s lack of smoothness, though. Given that Lexus prides itself on its silky mechanicals, the unit sounds rough at idle and is far from class-leading on the move.

Yet due to its narrow powerband, the Lexus doesn’t feel as flexible. Output builds from just under 2,000rpm but tails off quickly, and the revs die away slowly when changing gear, making the engine feel lazy and reluctant.

The six-speed manual box compounds the issue with its clumsy and awkward shift action. Sixth gear is very tall and, cruising at 70mph, the engine registers only 1,800rpm. This is just outside the powerband, so the Lexus is unresponsive at motorway speeds.

The 220d isn’t slow, but its power delivery  isn’t smooth enough to provide the effortless performance we’ve come to expect from a 175bhp diesel.

Through corners, the Lexus also disappoints because it lacks the sparkle that its rear-wheel-drive chassis promises. While the IS is balanced and grippy its steering is vague, and the handling isn’t as involving as the class leaders. The firmly set-up SEAT is more agile.

Ride comfort is good on smooth surfaces, where the suspension absorbs imperfections well. Over really nasty ruts and expansion joints, though, the IS is caught out, which takes the edge off long-distance comfort.

On the surface, the Lexus looks and feels like a quality product, but the peaky engine, awkward gearbox and limited practicality detract from its appeal. Given the extra cost over the Exeo, is it the better choice?

Chart position: 2WHY: It’s always been an alternative to the compact exec establishment, and now the IS has had a mid-life revamp.