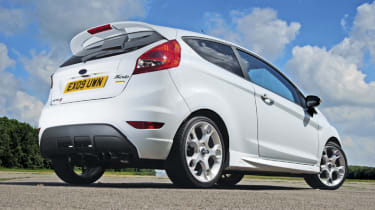 Few manufacturers can rival Ford’s reputation for producing great-handling cars – so fans will be salivating at the prospect of the latest Fiesta. Tuning specialist Mountune Performance has developed a package of extras to boost the firm’s 1.6-litre petrol engine by 20bhp.

The kit comes as a dealer-fit accessory and costs £1,299, although this figure doesn’t include fitting. It’s available from selected Ford outlets for Zetec-S and Titanium versions of the 1.6-litre supermini. Do the changes go far enough to keep pace with its established hot hatch rivals?

The aftermarket upgrade gives buyers plenty of choice when it comes to styling. While the basic kit only provides discreet Mountune badging to set it apart from lesser models, our Zetec-S test car was also equipped with Ford’s exterior styling kit, which comes highly recommended.

Its unique front bumper, lower side sills and rear spoiler fit perfectly with its go-faster performance, while our model’s smart alloys add an extra £100. If those changes aren’t enough, Mountune’s £149 Exterior Pack adds garish dayglo body graphics, and the firm also offers a set of lightweight black alloy wheels for £529.

That’s the outside taken care of then, so what’s it like inside? The cabin will be familiar to existing Fiesta owners, as there’s nothing to set it apart from the Zetec-S donor car. Even so, it compares well with its Renault and Vauxhall rivals. Not only is there plenty of space, but it’s attractively styled and features air-conditioning and a smart leather steering wheel as standard.

The Mountune extras are all about what’s under the bonnet, though. A high-performance sports exhaust, updated ECU and new air intake help take the 1.6-litre engine’s power output up from 118bhp to 138bhp, while torque rises from 152Nm to 170Nm. But despite this extra punch, the Ford still trails its rivals in the power stakes.

This was telling at the test track, where the Mountune Fiesta sprinted from 0-60mph in eight seconds flat – half-a-second slower than the Vauxhall and a full second behind the Renault. It also trailed in our in-gear tests, taking 11.9 seconds to drag from 50-70mph in fifth – that’s 5.5 seconds adrift of its livelier Renaultsport rival.

However, what the bare figures don’t relate is how much fun the Ford is to drive. Its pin-sharp throttle response, perfectly weighted steering and agile chassis all compensate for its lack of outright pace.

The new exhaust provides a racy soundtrack that will have you blipping the throttle on every downchange, and the smooth power delivery means it’s fun to extract every ounce of performance from the engine. The supple suspension is another plus point, as the Fiesta’s set-up was the most forgiving here. It’s the easiest to live with day-to-day, yet its excellent ride doesn’t come at the expense of handling or grip.

The sports exhaust does have one unwelcome side effect, because at high cruising speeds its burble becomes a drone. To make matters worse, the Fiesta is the only car here with a five-speed gearbox. As a result, it’s the noisiest on the motorway.

A standard Zetec-S with the Mountune upgrade is £15,194, and even when you add the bill for installation, it should still be the cheapest car in our line-up. As the kit is effectively retro-fitted, it doesn’t affect the official CO2 output or VED band, either, so road tax for the Ford is comfortably cheaper than for its rivals.

Economy of 30.5mpg was also the pick of the bunch. The question is, will the low running costs and entertaining handling be enough to compensate for the Fiesta’s lack of straight-line speed?

Chart position: 2WHY: The Ford Fiesta is our favourite supermini – and the Zetec-S-based Mountune is the hottest version yet.