Strong pace and practicality ensure this is a family favourite 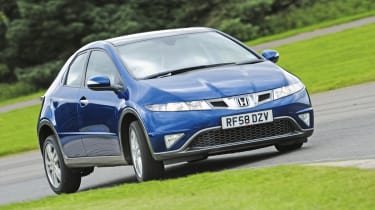 The British-built Civic has been a big success for Honda. To keep it looking fresh, the hatch received a new grille and revised tail-lights as part of a mid-life facelift last December.

Whether you love or loathe its stubby proportions and angled lines – and the debate still rages among our road test team – the Honda stands out when compared with the plain Subaru.

It’s a similar story in the cabin, where the split-level dashboard and scattered switchgear also divide opinion. You either love the futuristic layout or find it over-complicated and unattractive.

What can’t be faulted, however, is the quality of the materials used. The Civic’s switchgear has a much better feel than that of the Subaru.

Unfortunately, the driving position isn’t perfect, because the seat doesn’t adjust low enough. As a result, some drivers will find the rim of the steering wheel can obscure their view of the digital speedo read-out.

But what the Honda lacks in ergonomic excellence it makes up for with real family car practicality. The 485-litre boot is 184 litres bigger than the Subaru’s, while the rear seats fold and tumble in a single action.

Passenger space is good, too, although small back doors and angled C-pillars can make access a little bit tight.

Once inside, however, the panoramic sunroof that comes as standard in EX trim provides an airy feel.

And from the driving seat, even those not convinced by the Honda’s cabin layout will be impressed by the near-perfect weighting of the controls.

The Civic is easy to drive around town and is equally at home on twisty tarmac, where agile handling, precise steering and taut body control give it a sporty edge over the Impreza.

Even without the benefit of four-wheel drive, it didn’t suffer from a lack of traction in the dry conditions of our test.

In fact, its front tyres bite harder into the road than the Subaru’s, and the Honda generates more grip as it exits corners.

The precise gearshift and the petrol-like, rev-happy nature of the diesel engine also make it more entertaining to drive.

When it comes to punch, the 2.2-litre Civic has a larger capacity than its rival, although there are also 10Nm torque and 10bhp power deficits.

That doesn’t prove decisive in this test, however, and at the track the Honda matched the Subaru’s 8.8-second 0-60mph sprint time.

The smooth i-CTDi lacks immediate thrust when you floor the accelerator, so you’re forced to use all the revs.

Yet this adds to the enjoyment and doesn’t detract from its pace – the Honda was faster in all of our in-gear tests.

But for all of its smoothness, the Civic’s engine has more diesel rattle than its boxer rival.

The firm-riding Honda runs the Subaru close on comfort and refinement, though.

Road noise is isolated well, while the suspension does a better job of preventing crashes from entering the driving environment.

Throw in the practical cabin and sharp handling, and the Civic has broad appeal.

Chart position: 1WHY: The Honda provides sharp handling, refinement and a bold cabin in a practical package.