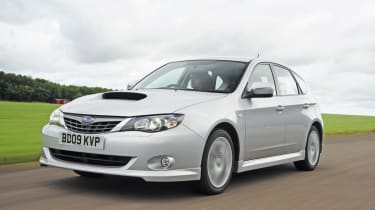 The diesel engine in the Impreza is a known quantity.

It has won praise in the Legacy and Forester models, and now the 2.0-litre unit has finally found its way into the hatchback.

For fans of performance Subarus, the Impreza lost some of its visual appeal in the switch from four-door saloon to five-door hatch.

But that’s unlikely to matter in the more rational diesel car market.

Of greater concern is the fact the Japanese car already looks a bit dated. Its long nose and plain side profile are far from exciting, although a prominent bonnet scoop does at least give a hint of the style associated with the firm’s rallying past.

Inside, there’s a curvy dash, but cheap plastics and a poor finish plague the cabin.

The driving position isn’t perfect, either, even though the steering wheel adjusts for reach and rake. There’s only limited movement available, so taller drivers will be a little cramped.

Yet while the interior lacks style, the Impreza’s cabin design doesn’t divide opinion like the more complex and futuristic layout of the Civic.

In the back, legroom is comparable with the Honda, but the Impreza’s four-wheel-drive set-up requires a large transmission tunnel, which restricts space for the middle passenger.

This also results in a high boot floor, so the Subaru boasts a 301-litre load area – 184 litres down on the Civic.

The Impreza doesn’t have the Honda’s mechanical robustness, either. Its six-speed gearbox feels flimsy and provides a notchy shift, while the other major controls lack precision – the numb steering is a particular offender.

It’s too light, offers little in the way of feedback and doesn’t inspire confidence.

Buyers expecting to reap the rewards of Subaru’s motorsport pedigree will be disappointed, as the Impreza is outshone by the agile Honda.

In the dry, there’s little advantage to the all-wheel-drive set-up. Straight-line traction is good, but the symmetrical system doesn’t feature the clever differential trickery of the WRX and STi.

So while it proves sure-footed, it doesn’t add to the driving experience.

The Impreza’s saving grace is its unique boxer engine, which is a gem. It’s refined at idle, but takes on a slight diesel rattle in the mid range before reverting to a subdued warble at the red line.

It doesn’t have the quick-revving nature of the Honda unit, yet provides a smooth surge of power that makes the Impreza effortlessly punchy.

Despite the extra drain of the 4WD, we averaged 34.4mpg – that’s 1.7mpg better than its rival – but emissions of 155g/km are no match for the Honda’s.

The Impreza is well equipped and competitively priced, and four-wheel-drive provides unique appeal. But does it have the all-round ability to win this test?

Chart position: 2WHY: With its boxer diesel and four-wheel drive, the Subaru is unique in the hatchback class.