Time is finally catching up with the nation’s best-seller 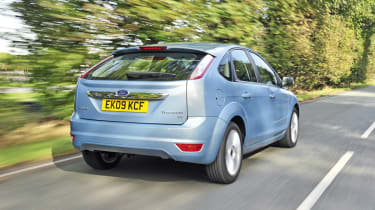 If the Astra wants to be a sales success, then this is the car it has to beat – the Ford Focus.

Despite being nearly six years old, the second-generation model is still Britain’s favourite family hatch. And it’s not hard to see why.

With its sharp driving dynamics, practical cabin and solid build quality, the Ford manages to meet the demands of both family motorists and keen drivers.

However, this will be tough assignment for the Focus, as it faces two much younger rivals with smaller price tags, fresher designs and more powerful engines.

There’s no denying that the Focus looks dated in this company, although the Mondeo-style swept back headlamps, LED rear lights and splashes of chrome boost the car’s visual appeal.

Unlike the flagship Titanium model in our pictures, Zetec versions get a tailgate spoiler and five-spoke alloys which help to give it a more dynamic appearance.

Settle behind the wheel, and you’ll find the Ford’s cabin has aged better than the exterior. The dashboard is robust and attractively styled, while the low-slung driving position is perfect. Other high points include sports seats and a leather trimmed three-spoke steering wheel – the Vauxhall has a plastic rim. However, the Focus can’t match the premium quality of the Golf or the eye-catching look of the Astra, and some of the plastics look and feel low rent.

At least there’s no shortage of space. Rear passengers get as much room as they would in the Astra or Golf, and the 385-litre boot is the biggest of our contenders. Better still, the Focus is the only car here to feature back seat squabs that flip forwards. They help create a load bay that’s virtually flat when the rear chairs are folded.

While the Ford’s versatility is impressive, its sparkling chassis is nothing short of brilliant. Precise and well weighted steering combines with incredible poise and strong grip to deliver plenty of driving thrills. And while it can’t match the supple low-speed ride of the Astra, the Zetec’s stiffer sports suspension feels much more composed at higher speeds, where its strong body control shines through.

The icing on the cake is a slick shift for the five-speed gearbox and progressive brakes. Sadly, even this dynamic masterclass can’t disguise the car’s lack of pace and refinement. At the heart of the problem is the normally aspirated 99bhp 1.6-litre engine, which feels underpowered and strained after a spell in either of its turbocharged rivals.

The Ford’s cause isn’t helped by its five-speed gearbox. Both the Astra and Golf have six ratios, but the engine in the Focus spins at an intrusive 3,250rpm at 70mph.

However, the Ford’s biggest stumbling block is its price. At £17,695, the Focus Zetec is £405 more than the Astra. Factor in disappointing residual values of 31.1 per cent, and its financial case starts to fall apart.

There’s no denying the Focus is still a fine family hatchback, but in the face of more modern machinery, it’s starting to struggle.

Chart position: 3WHY: The Ford Focus has ruled the sales charts for years, and will be a tough opponent for the sixth-generation Astra.