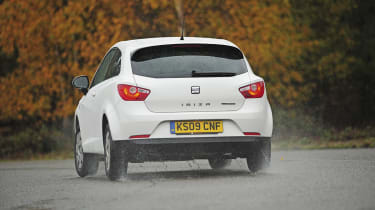 The new Ibiza Ecomotive is even more appealing than the original. It’s more attractive, practical and modern than ever – yet has an identical list price. But the SEAT isn’t fighting against its predecessor; it goes up against the Fiesta here – and from the outside it’s not a patch on its stylish rival.

As with the Ford, the Ecomotive gets lowered suspension, skinny tyres and a blanked-off front grille. There’s also a roof spoiler at the back to cut drag.

To keep weight to a minimum, the newcomer is based on the entry-level Ibiza, so kit is miserly and it features manual door mirrors. In contrast, the Fiesta has electrically adjustable ones as standard.

However, the rest of the interior doesn’t feel downmarket. Although the plastics are hard in places, they look more expensive than the Ford’s, and air-con is fitted as standard. The squashy seats are not as comfortable as those in its rival, though, and while the cabin is spacious, it can’t match the style that marks out the latest Fiesta.

The boot is a useful shape and easy to access, but the split-fold seats have been ditched in favour of a one-piece bench in the drive to save weight.

An even bigger issue is the three-cylinder diesel. It performs well enough when you’re in its narrow power band, but only gets going above 1,800rpm.

And as the Ecomotive has such tall gearing, you’re forced to change ratio all the time to keep the engine on song.

Even then, it always feels as though it’s struggling, which is particularly frustrating around town – where you end up holding on to each gear for far longer than usual. Shifting up to the tall fourth ratio is simply out of the question in the city.

At higher speeds, the engine improves, but our noise readings don’t reveal how harsh the clattery three-cylinder sounds. The trade-off is better economy – the TDI returned more than 55mpg in our test.

There is a price to pay for this, as from behind the wheel the SEAT doesn’t feel as composed as its rival. The soft suspension cushions bumps and potholes well, but doesn’t prevent roll in bends – which makes the Ibiza the less responsive car.

It also reached the grip limits of its narrow tyres more readily than the Ford. And while the light steering is perfect for negotiating city streets, it’s short on feel.

SEAT has put more focus on economy in the pursuit of eco perfection, but are the compromises too great?

Chart position: 2WHY: One of the original eco cars is back. Second-generation Ibiza Ecomotive aims to build on the original’s strengths.