New Venga is the most practical car in Kia’s three-strong supermini line-up, and has the C3 Picasso firmly in its sights. Does it tick all the right boxes? 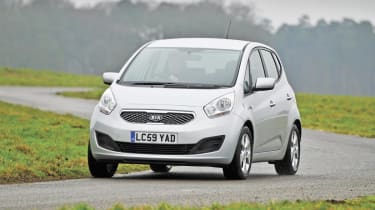 In the space of only a couple of years, Kia has gone from having a single, somewhat conventional supermini contender to three very different ones. The Rio is soldiering on alongside the tough-looking Soul, which has already made a mark at the fashion-led end of the small car sector.

While the Soul has also acquitted itself well against rival small people carriers, here is the car Kia bosses have vowed will beat Citroen’s class champ, the C3 Picasso, at its own game. The Venga is the third model in the brand’s three-pronged attack, and has the supermini-MPV establishment in its sights.

On first impressions you could be forgiven for thinking it’s simply a tall supermini, because the Kia doesn’t have the boxy profile which identifies its C3 rival. It’s a tidy piece of design with a distinctive face characterised by its angular headlamps and corporate grille. You won’t attract much attention in the Venga, but it’s sure to appeal to buyers who find the glitzy details of the Citroen a touch showy.

The stylists have taken an equally no-nonsense approach to the cabin, which is neatly designed and features some decent-quality switchgear in places. The Venga comes in a choice of three trim levels, and mid-range 2 spec includes luxuries such as air-conditioning, heated door mirrors, a leather-trimmed steering wheel and ESP all as standard. There is also Kia’s trademark iPod socket.

It would be good to see family-friendly extras like picnic tables, underfloor cubbies or a rear view mirror specifically designed to spy on kids in the back. However, such items aren’t available – they’re not offered on our mid-range Citroen test car, either (you get them only on the flagship C3 Exclusive, and you can’t buy them as options on lesser models). Sit inside the Kia, and it’s not the generous kit levels that you’ll notice first, but the amount of room available.

The raised roofline creates a spacious cabin, and even though the car is a few millimetres shorter overall than the Citroen, the Venga has a noticeably longer wheelbase. This does wonders for legroom inside. As with the C3 Picasso it has 60:40 split-folding and sliding rear seats, which let you balance knee room and boot space as required.

And that load area, accessed via a lifting tailgate, is huge. With the back bench positioned all the way forwards it provides 570 litres of storage space, while the Citroen can manage only 500 litres. A simple false floor provides a flat base when the seats are folded.

Up front, the driving position features a wide range of adjustment, but the thick windscreen pillars create significant blindspots when approaching roundabouts and junctions. Even so, the high stance and light controls make the Kia really easy to drive.

The Venga’s 1.4-litre petrol engine produces 89bhp and 137Nm of torque, which are virtually identical figures to the Citroen. As a result, the cars are closely matched against the clock, with the Kia covering 0-60mph in 12.5 seconds – four-tenths faster than its rival.

Our 50-70mph in-gear test was more revealing, as the Venga took 16.2 seconds compared to the C3’s 18.9 seconds. But it’s a less relaxed motorway companion.

Away from the test track, the Kia is the sportier choice. Its firm suspension is almost too hard for a family car. It can be unsettled by motorway expansion joints, and it thumps into big ruts, but the trade-off is superior body control and greater agility.

The electric power-steering set-up provides little feel, yet it’s responsive and light, and the front tyres bite harder into the tarmac, generating much more grip.

The Kia also delivers lower CO2 emissions and better fuel consumption than its rival, although our return of 31.5mpg was still disappointing for what is essentially a supermini. The car’s claimed combined economy is 45.6mpg.

However, the ace in the Venga’s pack is the ownership experience, as it comes with a unique seven-year warranty. Kia also finished in a fine 12th place overall in our Driver Power 2009 best manufacturers survey – well ahead of Citroen – and its dealers ranked an even more impressive ninth out of 30.

So, has the Venga done enough to live up to the claims of company bosses and knock the Citroen off top spot in the supermini-MPV sector?