Our reigning class champ has successfully defended its crown before. We see if it can do it again in the face of a younger, more affordable rival. 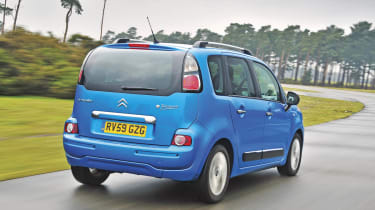 Citroen has become a master of the MPV art.

Its people carrier line-up ranges from the budget-priced Nemo to the full-sized C8, and its Picasso models are some of the best in the business. The supermini-based C3 is our class favourite, and its badge couldn’t be any more appropriate.

The artist Picasso pioneered the cubist movement, and the C3 is as boxy as they come. It doesn’t hide its MPV roots, and celebrates its practicality with a near-vertical tailgate, upright side windows and an unapologetically bluff profile. The car pictured is a top-of-the range Exclusive model, and the VTR+ we tested does without its roof rails and chrome rear number plate surround. Even so, the C3’s overall shape is undeniably eye-catching.

The interior is even more unconventional. It has a central instrument pod on the dashboard with distinctive digital displays. Smart chrome-effect air vents add a touch of glamour, and the huge panoramic windscreen lets in plenty of light – although it does leave front seat occupants feeling a little exposed.

Yet this car is all about what goes on in the back, and its high roofline creates a real sense of space. The 60:40 split-folding and sliding rear bench is equally as flexible as the Kia’s set-up, but the C3 also provides lots of useful storage cubbies. However, the airline-style folding tables in the rear are fitted only to Exclusive variants, and can’t be added to lesser models.

With its angular exterior and marginally longer body, the Citroen was naturally going to provide a big boot. The Kia beats our class champ for volume, though. With the back seats in place, the C3 Picasso offers from 383-500 litres of luggage space, depending upon where you position the rear bench. In comparison, the shorter Venga manages between 440 and 570 litres. Yet fold the back row and the roles are reversed, because the European machine boasts a van-rivalling maximum load space of 1,506 litres – a hefty 252 litres more than its rival.

A false boot floor also ensures there’s a flat basis for any larger objects in this configuration.

Hit the road and the Citroen slips behind the Kia. Its 1.4-litre petrol engine has a tiny 5bhp advantage, although the lighter Venga proved to be quicker against the clock – the Picasso trailed by four-tenths in the sprint from 0-60mph, with a time of 12.5 seconds. The C3 needs to be worked hard to keep up with traffic, and its slack long-throw gearbox takes some of the fun out of the experience.

Its powerplant is smooth and refined, which helps to make the C3 a decent cruiser. But at motorway pace, the Citroen buzzes along at a heady 3,500rpm.

Predictably, considering its origins, the C3 Picasso is the more comfortable choice – Citroen is famed for the floaty ride provided by its trademark hydropneumatic suspension. And while the C3 makes use of conventional springs and dampers, it absorbs bumps more effectively than the Venga.

The trade-off for this extra comfort is that the Picasso’s body control isn’t as sharp, and it lacks the agility and outright grip of its rival here.

The Citroen also can’t hope to match the incredible seven-year warranty that Kia now provides across its model line-up. That leaves the more expensive C3 Picasso with a mountain to climb if it’s to retain its hard-earned supermini-MPV crown.