Kia has entered the supermini-MPV market with the smart-looking Venga. But stacked up against it is one of the best family cars money can buy... 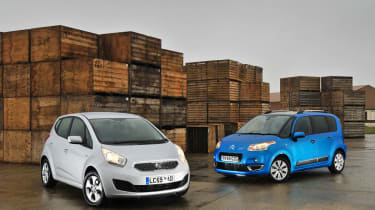 In the MPV market boxy can be beautiful – and the Citroen C3 Picasso makes a virtue of its practical proportions. But our current class champ faces a tough new rival in the battle for supermini-MPV supremacy: the Kia Venga.

With styling overseen by the man who penned the legendary lines of the original Audi TT, Kia design director Peter Schreyer, it is aimed squarely at the C3 Picasso. And as with other models from the firm, we can be sure that it will match value pricing with decent dynamics and an appealing aftersales package. The big question is, will this be enough for the Venga to overtake one of the leading lights in the showroom?

From the C8 and Berlingo Multispace to the Nemo and C4 Picasso, Citroen has a rich MPV heritage – and it won’t give up its title easily. Here we put the 1.4-litre petrol C3 Picasso in mid-range VTR+ trim up against its opposite number from Kia. They’re closely matched regarding kit and performance, so picking an early favourite is virtually impossible.

The Citroen comes fresh from a top four finish in our recent family car world cup – but that will count for nothing as it lines up against the Venga in the Korean model’s first UK test.

Supermini-MPVs are a recent phenomenon, but they’re booming in popularity. Until now the Citroen has set the benchmark as the must-have model, yet the Kia beats it here. While the Venga isn’t especially clever or more versatile than its rival, it does provide more space from a smaller package. It also mixes sharper dynamics with better economy, stronger performance and lower emissions.If you want a quirky choice that’s bound to get attention, or rank ride comfort ahead of ultimate load space or handling, the Citroen is still the number one. But in every other respect, it’s beaten by its new competitor. A bargain price, brilliant warranty and highly regarded dealer network give the Kia the edge in a gruelling family car encounter. The Citroen is best sampled in top-spec diesel guise, yet that makes it an expensive choice.