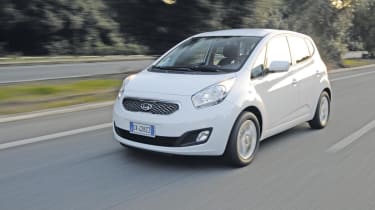 Despite some issues with the ride and steering of the cars we drove – which Kia assures us it will resolve – the Venga should prove appealing to those looking for versatile family transport. Its seven-year warranty is a bonus. Look at it as the Soul’s sensible brother: it’s a similar size while being more practical – and it doesn’t have the latter’s polarising looks.

Kia’s new baby has arrived – literally. The Venga gets its name from the Spanish for ‘to arrive’, and it follows in the footsteps of the Soul as the manufacturer’s second small family car in a year.

More importantly, the Venga is the model which looks set to cement Kia’s fast-growing reputation for building vehicles which are capable of challenging for class honours.

And there’s no doubt that the Korean firm is on a roll, with sales remaining strong despite the declining new car market in 2009. In fact, Kia has now overtaken Ford to become the world’s fourth biggest auto manufacturer, largely because of a range that offers durability, affordability, practicality and the assurance of class-leading warranties. These are all qualities promised by the Venga when it hits the UK in February 2010 – but more than that, the car is also set to deliver a few surprises.

Why? Well, it’s the first model designed from scratch by Kia’s Peter Schreyer, the ex-Audi design chief. And although it doesn’t break the mould or have the visual shock factor of the Soul, it’s a stylish, small MPV that hides its bulk well with some interesting touches.

But in this tough and crowded market segment, which includes cars as accomplished as the Nissan Note and Citroen C3 Picasso, looking smart isn’t enough. Any contender has to combine a relatively small footprint with genuine practicality. Fortunately, the Venga doesn’t disappoint, as it manages to cram so much useful space into a little package.

The 440-litre boot seems big, and legroom is virtually the same as that offered by the similarly-sized Soul. Four adults can be accommodated in comfort thanks to the high roofline, but if you need even more load space, the split-folding rear seats slide forward to take extra luggage. They also fold flat easily, and the boot floor can be raised, too.

The interior itself matches the quality of the Soul’s. That means it’s solidly built, although the surfaces are made of hard, dark plastic. However, the design is neat and intuitive, and the centre console stack is especially well thought out, grouping the majorcontrols for the car’s air-conand entertainment systems together in a neat fashion.

The oil-burner is teamed with a six-speed manual and can be specified as an EcoDynamics version which has Kia’s latest ISG stop-start technology. This car returns 62.8mpg and only 117g/km of CO2. None of these units is a high performer by any means, and the diesel is rather noisy – but this is the one to go for thanks to the flexibility its low-down pulling power affords.

It’s difficult to draw a true conclusion about the Venga’s on-road behaviour at the moment, though, because the models we drove – both of the 1.4-litre variants – had a different steering and suspension set-up to the UK cars we’ll see here in February.

Kia has been testing Venga prototypes in Britain since last March, and so will hopefully address a ride which is too soft and makes the model unsettled on anything but perfect tarmac.

The body never seems to be quite under control, so it pitches noticeably during braking and gear changing, and sways from side to side during cornering. UK cars will be firmed up. Also, the steering will be sharpened for more response – another welcome move, as it feels slack at low speeds.

Otherwise, the Venga does little wrong. It offers space, practicality and comfort in a stylish package that will be easy to justify to the bank manager.

Rival: Citroen C3 Picasso Stylish, well built, innovative and practical, this is our favourite Citroen. It is packed with clever features, and is exciting to drive without being fussy to live with.