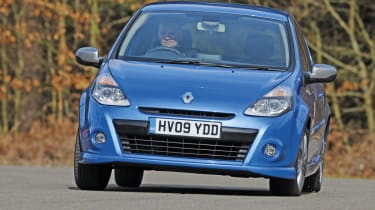 IN recent years, the Renaultsport Clio has been stealing the hot hatch headlines for Renault. However, take a close look at the French manufacturer’s price lists, and you’ll spot the Clio GT.

Designed to appeal to pocket rocket fans on a budget, the warmed-over Clio features a 126bhp 1.6-litre engine from the Renaultsport Twingo 133, plus a host of chassis tweaks to sharpen up the driving experience. Better still, at £14,285, it is more than £1,000 cheaper to buy than the Punto Evo.

There’s no denying that the GT looks the part. Using the standard three-door car as a starting point, Renault’s designers have added a neat bodykit that includes side skirts, a deeper front bumper and a tailgate spoiler. Completing the sporty makeover is a chrome-tipped twin-exit exhaust and a handsome set of 16-inch alloy wheels.

Climb aboard, and it’s clear that bosses have raided the firm’s Renaultsport parts bin to give the cabin a makeover. The figure-hugging front seats and thick-rimmed steering wheel have been lifted straight from the Clio 200. Look elsewhere, and you’ll spot the aluminium pedals, racy silver trim for the dashboard and eye-catching white-backed dials.

Most of the plastics have a quality feel, and the interior is as tightly screwed together as the class leaders. The Renault’s cabin matches the Punto’s for passenger space, while the boot will accommodate 288 litres of luggage – which is 13 litres more than its Italian rival.

The Clio has another capacity advantage over the Fiat elsewhere – under the bonnet. However, the GT’s larger, naturally aspirated 126bhp 1.6-litre engine can’t match the punch of the Punto’s turbo. With only 155Nm of torque – the Evo produces a muscular 208Nm – the French car needs to be worked hard to keep up with its competitor. On the plus side, the tuneful unit thrives on high revs and the six- speed box has a short throw and precise action.

Point the Clio’s nose into a corner, and it’s immediately clear that the model shares the same sporting genes as its more powerful Renaultsport brother. The combination of quick steering and strong body control means the car slices through corners with real poise and agility. It’s a more engaging machine than the safe and predictable Fiat, and delivers old-school hot hatch thrills. This eagerness on back roads comes at the expense of refinement, though, and the boisterous GT can be tiresome on long journeys. Despite the advantage of a six-ratio transmission, the Renault’s engine is spinning at 3,200rpm at 70mph – which is 250rpm faster than the Fiat.

Not only does this have an impact on refinement, it also means fuel economy takes a hit. Over the course of our test, the Clio GT could manage a return of only 28.7mpg.

At least Renault owners can take comfort in their car’s lower list price. And while the Clio can’t quite match the Punto’s generous standard kit, its options are well priced and worth having – such as the excellent £460 TomTom sat-nav. The GT is fun to drive and great value, and it certainly makes a strong case for victory in this encounter.