Can retro favourite keep up to date with German rival? 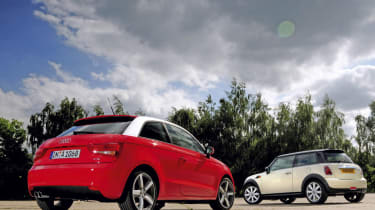 The MINI has been the stylish small car of choice ever since its introduction in 2001. Its build quality, funky retro looks, never-ending customisation options and sporty handling have consistently seen it fight off challengers. But now it faces the toughest battle yet in the form of the new Audi A1.

Line up the two cars side-by-side, and the Audi’s modern design is arguably more eye-catching. However, the MINI’s short overhangs and wheel-at-each-corner stance make it look the more sporting of the pair, especially with our example’s optional alloys and bonnet stripes. The large, round headlights, chrome detailing, clamshell bonnet and contrasting roof are unashamedly retro.

Inside, it’s a similar story, and the funky cabin couldn’t be more different from the luxurious and understated Audi’s. Aircraft-style flick switches, eyeball air vents and a huge, centre-mounted speedometer make it one of the most recognisable interiors on the market.

The low-slung driving position is better than the Audi’s, but the A1’s arrival has shown up some of the cheaper materials evident in the MINI’s door panels, centre console backing and speedometer casing. The new Audi also highlights the Cooper’s lack of space – rear passengers will struggle with limited head and legroom, while the boot area is a rather measly 160 litres. Anything more than a couple of shopping bags will require one of the seat backs to be dropped.

The MINI still has a trick up it sleeve, though. Perfectly weighted controls, an agile chassis and responsive steering work together to make the Cooper the star performer when it comes to twisty back roads. However, the trade-off is a stiff ride that had us wishing for the comfort of the Audi.

Work the naturally aspirated 1.6-litre unit hard, stay in the correct gear and you will keep the A1 in sight – but even then the MINI is marginally slower.

It is much harder to drive quickly, lacking the easy acceleration of the torque-laden, turbocharged unit in the A1. MINI’s impressive ‘tlc’ pack covers servicing for five years or 50,000 miles for only £200 – that’s £50 less than Audi’s package. The MINI is also cheaper to buy, but you’ll have to spend an extra £525 to get the Bluetooth and air-con which come as standard on the A1.