With its stylish looks and great build, new model aims to push quality to another level. 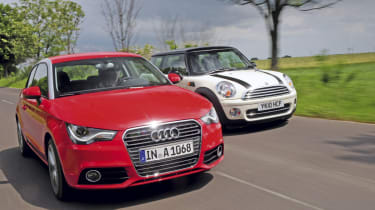 The success of the MINI meant Audi knew it needed to build a serious rival to compete — and it’s done just that! The family resemblance with the rest of the Audi range is there for all to see. Up front the familiar over-sized grille is flanked by optional £750 LED running lights – but move around the car and things get more distinctive, especially when finished in red with contrasting silver rails.

The silhouette has a slight resemblance to Seat’s Ibiza – which is built on the same platform – but thanks to taut and unfussy body panels, the A1 could only be an Audi.

Video: watch CarBuyer's video review of the Audi A1

From behind, the extra length over the MINI is clear, as the tailgate wraps around the rear haunches and incorporates LED lights. With a neat roof spoiler, twin exhaust pipes and optional alloys, it looks sporty without being over the top. It doesn’t have retro appeal, but there’s no doubt that the A1 is classy.

It’s the interior where it plays its trump card, though, with quality that is more befitting of the flagship A8 than a supermini. The controls are beautifully finished, including the soft leather steering wheel, gearlever and handbrake, plus an engraved metal start button.

Optional LEDs are used to light the cabin, boosting the premium feel, while rotary air-con controls are similar to the TT’s. The sat-nav screen pops up from the top of the dash and the MMI cabin control system is intuitive to use.

If you fancy personalising the interior, there are options to change the materials throughout, including the neat circular air vents and transmission tunnel. Those in the rear will appreciate more room than in the MINI, and the 270-litre boot is 110 litres bigger with the seats in place. It also benefits from an adjustable floor, and thanks to the wraparound tailgate, there’s a large boot opening. Bigger windows also add to the sensation of space. Our only gripes are the offset pedals and high-mounted driver’s seat.

On the move, the A1 reinforces the feel that it’s from a different class – the levels of refinement are better even than the platform-sharing VW Polo. It’s this, combined with a relatively supple ride, that makes it a pleasant motorway companion.

However, on more challenging roads, that softer edge is clearly evident, and the A1 doesn’t exhibit the sharp handling of the MINI. It grips well, is fairly engaging and the brakes are incredibly powerful, but the steering feel could be better. After the ride and refinement, it’s the flexibility of the engine that grabs your attention – the Audi is quicker than the Cooper in every respect.

The extra low-down torque from the turbocharged motor also means it’s more relaxing to drive than the MINI, which needs to be worked hard. And although the A1 isn’t very tuneful or hungry for the red-line, it is smooth and willing.

Considering the pace on offer from these cars, the green credentials are impressive. The Audi’s combined economy of 53.3mpg is slightly better than its rival, and with a larger fuel tank it can go an extra 68 miles on each fill. A CO2 figure of 126g/km is competitive, and the stop-start system operates smoothly.

WHY: The A1 promises to be edgy, upmarket and fun. It packs all the quality of larger Audis into a small and relatively affordable package.