Hatch finally brings brand back, but is it worth the wait? 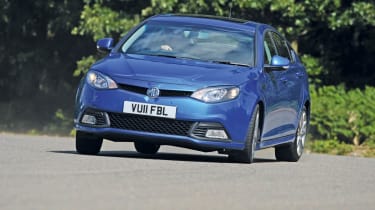 6
The best things are supposed to come to those who wait – and bosses at reborn British brand MG hope that is the case. It has been 16 years since the firm pulled the wraps off an all-new model, so expectations for the MG6 are high.
Designed and built in the UK, the ambitious car aims to topple the established rivals with its blend of sporty appeal and value for money.
Video: watch CarBuyer's video review of the MG6
[[{"type":"media","view_mode":"content_narrow","fid":"68672","attributes":{"alt":"","class":"media-image"}}]]
It gets off to a strong start, as the sleek shape stands out from the crowd. Styled by the brand’s British design team, the five-door hatch has a rakish profile. At the front is the traditional octagon-shaped MG badge, flanked by a narrow grille and distinctive swept-back headlights. At the rear, an equally bold set of LED tail-lamps helps to provide a distinctive look.
Our range-topping TSE test car was given extra kerb appeal by a sporty tailgate spoiler and metallic grey 18-inch alloy wheels. However, some of the details – like the cheap-looking dummy air vents stuck to the front wings – let the car down.
Climb aboard, and it’s instantly clear that plenty of effort has been put into giving the cabin a modern look. The dashboard features a clean and uncluttered design, while the use of silver trim creates a surprisingly classy and upmarket atmosphere.
Sadly, this illusion is shattered the moment you touch any part of the interior. While the leather trim covering the chunky three-spoke steering wheel feels good, the rest of the materials are extremely low rent. The plastics are hard, and the switchgear doesn’t operate with the well engineered precision that you experience in the Alfa and Ford.
Our testers also found the square-edged handbrake clumsy to use, and the lightweight keyfob looks and feels really cheap. Still, there are few complaints about the luxury car-rivalling standard kit tally. Heated and leather-trimmed seats, sat-nav and parking sensors all feature.
Add these desirable extras to the Alfa, and you’ll hike the price by a whopping £3,610.
Given that it’s longer than its rivals here, the MG is not surprisingly the most practical choice. Occupants in the rear get a generous amount of head and legroom, while the large tailgate lifts to reveal a vast 472-litre load bay. Fold the 60:40-split rear bench flat, and capacity increases to a generous 1,268 litres.
There’s lots of useful stowage space, with a large glovebox and a deep, air-conditioned container between the front seats. Plus, down by the driver’s right knee is a small, lidded cubby housing
a USB and aux-in connection – perfect for keeping your music device away from prying eyes.
So, the MG’s practicality is up to scratch – but what about the performance? The turbocharged 1.8-litre engine is the largest here, but not the most powerful; its 158bhp output trails the Alfa’s
by 12bhp. Further hampering the car’s potential is the hefty 1,495kg kerbweight; the Giulietta tips the scales at only 1,290kg.
Even so, the MG completed the benchmark 0-60mph sprint three-tenths quicker than the Focus, with a time of 8.8 seconds. Yet while its rivals get six-speed gearboxes, the Brit has to make do with a clunky five-ratio set-up, and this severely blunted its pace during our in-gear tests.
On the road, the performance shortfall is less obvious, thanks in part to the TSE’s sharp throttle responses and decent muscle at low revs. This is a good thing, as extending the turbocharged powerplant is an unpleasant exercise. Above 4,000rpm, it sounds harsh and strained, and sends vibrations through the steering wheel and pedals. The mechanical commotion dies down a little once you’re up to cruising speed, but it is replaced by tyre roar and excessive wind noise. Don’t write off the MG’s driving dynamics, though – it has a trick up its sleeve.
Turn into a corner, and you realise the engineers have endowed the chassis with strong poise and agility. Steering that’s heavy at parking speeds becomes more manageable and delivers decent feedback, plus body control is impressive.
It can’t match the Ford for grip and agility, but the MG is leagues ahead of the lead-footed Alfa. And although you hear the car hitting bumps, the firm suspension does a decent job of making sure you don’t feel them. You can’t fault the MG’s price, either – at £18,995, it undercuts the less generously equipped Alfa by a healthy £2,310.
Sadly, this saving is easily offset by woeful residuals of 25.5 per cent. Adding to the financial misery are 184g/km CO2 emissions of and a thirsty 25.5mpg return at the pumps.
On the face of it, the MG6 is a handsome, practical and fun family hatch with a bargain price. It’s let down by a cheap cabin, poor mechanical refinement and high running costs – but will these flaws spoil a comeback that’s been 16 years in the making?

Chart position: 3WHY: Legendary MG brand is back with a turbocharged bang. Newcomer aims to put the Chinese-owned marque back in the sporty family car mix.