Italian beauty offers substance as well as style, and is a real contender 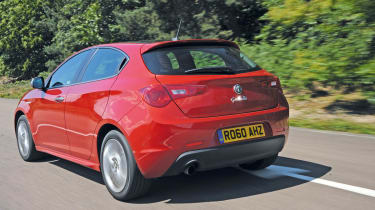 7
Few mainstream manufacturers can  match Alfa Romeo for sporty appeal. Look through the Italian firm’s line-up, and you’ll discover a host of machines that aim  to mix eye-catching style and entertaining driving dynamics with family friendly practicality and low running costs. And  the Giulietta is no exception.
VIDEO: our sister website CarBuyer's review of the Alfa Giulietta
[[{"type":"media","view_mode":"content_narrow","fid":"68549","attributes":{"alt":"","class":"media-image"}}]]
Even though it was launched nearly a year ago, the hatchback still has the ability to turn heads. With its bold mix of curves, creases and sculpted surfaces,  the Giulietta has no trouble standing out from the family  car crowd. Our Veloce trim test model was given even greater visual appeal by its gorgeous  8C Red paintwork, although  this option costs an eye- watering £1,790 extra!
Inside, the designers at  Alfa have clearly attempted  to take an equally stylish approach. Highlights include heavily cowled dials, a row of retro-inspired rocker switches  on the centre console, racy aluminium pedals, plus red stitching for the leather-trimmed steering wheel and gearlever gaiter. And while the quality  of the plastics is no match for  those in the Focus, the metal-effect strip running across the width of the dashboard looks good and adds a touch of class.
Despite having the highest  list price here, the Alfa trails the MG for standard kit. Desirable items such as climate control, Bluetooth and a USB connection all feature, although sat-nav, parking sensors and leather  seat trim add a whopping  £3,350 to the bottom line.
The Giulietta also has to  give best to the bigger MG  in the space race, although  it is more than a match for  the Ford. Occupants in the  rear get a decent amount of head and legroom, while swinging open the tailgate reveals a useful 350-litre boot – although this is blighted by a high loading lip.
At the test track, the Alfa was able to show its rivals a clean pair of heels, blasting from 0-60mph in only 8.3 seconds – that’s half a second faster than the MG. Better still, the flexible, smooth-revving turbocharged 1.4-litre combines muscular power delivery with a rorty, characterful soundtrack.
Sadly, the rest of the Alfa’s driving dynamics aren’t nearly as convincing. Much of the blame rests with the company’s DNA system, which allows you to alter the sharpness of the steering, throttle and stability control  to suit driving conditions.
In sporty Dynamic mode,  the steering is heavy and lifeless, which saps any fun from the driving experience. Switch to  the Normal setting, and you  get a more natural feel through the wheel, but throttle response is severely blunted. And even with the sports suspension set- up and wider tyres of our Veloce, the nose washes wide of your intended line far too easily in sharper bends. At least the ride does a good job of smoothing out bumps, while noise levels are lower than in the raucous MG.
The Alfa scores for its low running costs, which go some way to cancelling out its higher price tag. Ordinarily, the Italian brand relies on its sportiness to draw in buyers, but the Giulietta’s biggest asset is its mix of style and strong financial appeal.

Chart position: 2WHY: Few companies are capable of stirring the emotions quite like Alfa Romeo. The brilliant MultiAir turbocharged petrol engine brings sparkle to Giulietta mix.