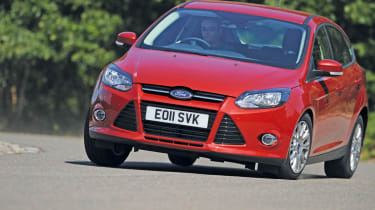 4
It's rare for the Ford Focus to be the joker in the pack, but that’s exactly what the all-new hatch represents here. While the badge doesn’t have its opponents’ sporty appeal, the model sets the dynamic benchmark in this class.
VIDEO: our sister website CarBuyer's review of the Ford Focus EcoBoost
[[{"type":"media","view_mode":"content_narrow","fid":"69893","attributes":{"alt":"","class":"media-image"}}]]
The Ford isn’t a one-trick pony, either, because in high-spec Titanium trim it promises a spacious and well equipped cabin, plus refinement on par with an executive car. On top of that, the punchy new EcoBoost engine provides a compelling blend of pace and efficiency.
What’s immediately clear is that the Focus doesn’t share the same racy styling cues as its rivals. With its mix of curves, slashes and straight lines, the Ford is the most modern-looking car here, but it does without the hot hatch-inspired spoilers and side skirts, and that means a more grown-up, low-key appearance.
This theme continues inside, where the use of mainly high-quality materials results in an upmarket ambience. Fit and finish is also first rate, while a wide range of seat and wheel adjustment makes it easy to find a perfect driving position. There’s also plenty of room, with the Focus serving up as much space for occupants as the Alfa. It leads the way for cubby storage, thanks to its large glovebox, deep lidded bin between the front seats and wide door pockets.
You also benefit from a raft of gadgets, including climate control and a DAB digital radio. It’s not all good news, though. With its overwhelming mix of shapes, angles and textures, the Ford’s dash looks fussy. But you’ll only discover its biggest failing when you lift the tailgate. Specify an optional full-size spare wheel, as on our test car, and the boot swallows only 277 litres of luggage – that’s a massive 195 litres less than the MG. Even with the standard space saver, you get a mere 316 litres of room.
What the Ford lacks in practicality it attempts to make up for with pace. But the keen-revving 1.6-litre EcoBoost is the least powerful engine here, giving 148bhp. In our performance tests at the track, the Focus was beaten by the Giulietta for raw speed – although the real-world margins are less clear cut, and the precise six-speed manual gearbox allows you to make the most of the performance on offer. As ever with the Focus, what shines brightest is the thrilling chassis.
Direct steering and huge grip allow it to corner with real agility – neither the Alfa or MG is as involving or composed. The trade-off is a ride that’s firm in town and unsettled at motorway speeds. Refinement is strong, though, with road and wind noise kept to a minimum.
For buyers seeking driving thrills, the poised and punchy Focus is second to none. It’s also good value, and feels a class above for quality and refinement. So, does our joker hold all the aces?

Chart position: 1WHY: The standard bearer for entertaining handling in the family car class now has an engine to match its talents. Is that enough to power the Focus to victory?