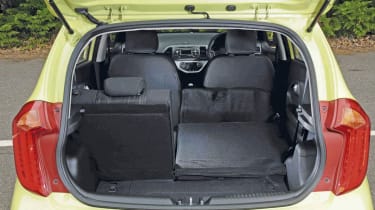 5
Make no mistake – Kia is on a roll. The success of cars such as the Cee’d family hatch, Venga supermini-MPV and Sportage crossover has seen expectations of the brand rocket in the past few years.
The Picanto is one of the models that got the ball rolling, giving the city car establishment a jolt when it arrived in 2004. It’s since been overtaken by the i10, but the latest version aims to emerge from the Hyundai’s shadow.
Video: watch CarBuyer's video review of the Kia Picanto
[[{"type":"media","view_mode":"content_narrow","fid":"68674","attributes":{"alt":"","class":"media-image"}}]]
One way to set a car apart from its closest competitor is to make it look unique, and the Kia does that. Heavily sculpted side panels, a thrusting front bumper and distinctive tail-lights ensure
it steals a march on its rival from the side of the road.
The Kia’s defined bodywork makes the rounded Hyundai appear more conservative, and our top-of-the-range 3 version exaggerates this impression. It features smart 15-inch alloy wheels, LED daytime running lights and attractive LED rear lamps – additions that aren’t available on lesser models, even as an optional extra.
The interior is just as well appointed in top-spec trim, so inside you’ll find a smart digital panel for the climate control, a multifunction steering wheel and Bluetooth technology. None of this is standard on the i10.
Even without this array of kit, the Kia has an impressive cabin. Its modern design and high-quality materials set the standard in this sector. The only black marks are for the steering column, which doesn’t adjust for reach (the same as on the Hyundai), and rear legroom, which trails its opponent.
Boot space also lags behind the i10, and the Picanto does without its rival’s useful underfloor cubby. Yet one area in which you can’t separate the two models is under the bonnet; they share the same petrol engine. Kia bills its unit as a 1.25-litre engine, but it shares the same 1,248cc capacity as the 1.2-litre Hyundai.
Power is rated at 84bhp (1bhp less than its rival) and it produces 121Nm of torque – matching the i10 exactly. This is no bad thing, as it delivers a perfect blend of low-down punch and refinement.
The Picanto is as happy cruising along crowded streets as it is on dual carriageways, and it provides enough performance to easily keep pace with fast-moving traffic.
Against the clock, our duo was evenly matched, with the Kia sprinting from 0-60mph in 11.2 seconds; only three-tenths behind the Hyundai. Our in-gear acceleration tests were equally close, so there’s not much to choose between the contenders for outright pace.
A positive gearshift, light and low-geared steering and responsive brakes ensure a simple and well honed dynamic package. The biggest differences emerge after driving the two cars back to back, though. With its larger wheels and wider tyres, the flagship Kia generates greater grip than its rival. This means it tackles corners more gamely – although the trade-off is a less forgiving ride, as the narrower sidewalls of its tyres do less to cushion the suspension from bumps and ruts.
It’s still no hot hatch, and its ride quality is unlikely to offend city car buyers, but the extra compliance of the Hyundai is noticeable. Variants with smaller wheels are likely to be more accomplished on potholed city streets, yet the Picanto felt more composed in corners and under braking, so the two cars have subtly different characters from behind the wheel.
Fuel economy of 34.1mpg doesn’t sound great for such a small machine, although this figure included performance testing; real-world returns of up to 50mpg are on the cards. Low emissions and running costs are guaranteed, too, so the Kia makes sound financial sense in the long term. Only the high initial outlay for this flagship model detracts from the package.

Chart position: 2WHY: Picanto has always played second fiddle to its Hyundai rival, but latest model has the i10 in sight. If the looks are anything to go by, it will be a fine buy.