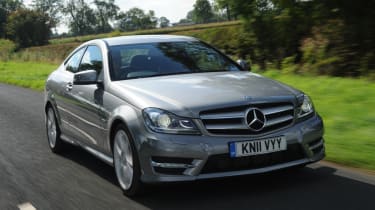 8
When it comes to classy coupés, Mercedes has an unrivalled pedigree. For the past 50 years, the three-pointed star has turned out numerous sleek four-seaters that have successfully combined head-turning looks, top-notch quality and plenty of upmarket appeal.
Despite this strong track record, the German firm’s most recent entry-level coupé proved to be a major letdown. With its stubby hatchback styling and lacklustre driving dynamics, the Sportcoupé failed to live up to the standard of its illustrious predecessors when it debuted in 2001. Even a thorough facelift and change of name to CLC in 2008 failed to improve the fortunes of the ungainly three-door.
Advertisement - Article continues below
So, can the all-new C-Class Coupé help Mercedes recapture its form in a sector where style sells? There’s no doubting that it’s a vast improvement visually. It is based on the recently revised C-Class saloon, and from the front bumper to the base of the windscreen it’s identical to its four-door stablemate. However, from there back the rest of the bodywork is unique.
A rising waistline, high-set tail and neat detailing help create a shape that’s every bit as stylish and classy as that of its BMW rival. And a neat AMG bodykit and seven-spoke 18-inch alloys add a dose of sporty aggression to the eye-catching lines.
Advertisement
Advertisement - Article continues below
Inside, the Coupé gets the revised dash that made its debut in other C-Class models earlier in the year. With improved materials, new dials and a tweaked layout, it’s a model of clarity and quality. Yet while the driving position is comfortable, tall motorists will find the heavily bolstered seat is too high, even in its lowest setting.
Advertisement - Article continues below
Elsewhere, the C180’s interior scores for its surprising space and versatility. It’s a strict four-seater, but the two rear chairs serve up decent room for legs and elbows, while numerous cubbies and bins take care of storage. Opening the bootlid reveals a well shaped 450-litre load bay.
You also get plenty of gadgets and gizmos, with sat-nav, an iPod connection and Bluetooth all featuring. Specify this desirable kit on the BMW, and you’ll add an eye-watering £1,920 to the price.
Unfortunately, all versions of the C-Class use the firm’s Artico faux leather material for the seats, and it doesn’t quite have the look and feel of the real thing. Still, while the Mercedes can’t boast the genuine leather trim of the BMW, it manages to give its rival a good hiding at the test track. Thanks to the addition of a turbocharger, the C180’s smaller 1.8-litre powerplant delivers 154bhp and 250Nm of torque – advantages of 13bhp and 60Nm respectively over the 3 Series.
Advertisement - Article continues below
Advertisement
Advertisement - Article continues below
As a result, the C-Class took only 8.3 seconds to complete the 0-60mph sprint, while its in-gear performance was even stronger. On the road, this extra pace helps make it a much more rapid and relaxing companion than its competitor.
However, the good news is that the car’s dynamic superiority isn’t limited to its engine. Standard adaptive dampers and suspension that has been lowered by 15mm help the C180 put in a poised and polished performance on twisty back roads.
The steering lacks the weight and feel of the BMW’s, but the impressive grip and excellent body control ensure the car is a composed and confidence-inspiring partner. In fact, the only black mark is the six-speed manual box’s slightly vague shift action. Where the C-Class really scores, though, is in its ability to transform into a refined and comfortable long-distance cruiser. Noise levels are low and the clever dampers help iron out the worst bumps; while the suspension is still firm, it’s nowhere near as harsh as the BMW’s set-up.
It’s only when you consult a calculator that the C180 struggles. It manages to justify its higher list price with a better kit count, but CO2 emissions of 169g/km mean company car users and private buyers will pay more in tax if they choose it over the 318i.
So, will these financial failings harm the C-Class’s chances in the final reckoning – or will its sleek style, strong performance and sharp dynamics help ease it to a well earned victory?