Is our class favourite still good enough to stay at the top? 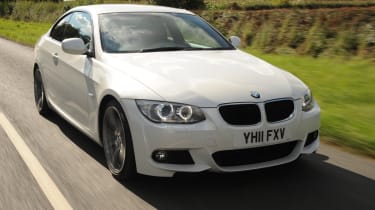 8
The BMW 3 Series Coupe has always appealed as much to the head as to the heart. By mixing sleek lines and engaging driving dynamics with four-seater practicality and low running costs, it is a zero-compromise choice.
A mid-life refresh last year only boosted the model’s desirability. Sharper looks, more powerful engines and an extra sprinkling of standard kit helped cement its place at the top of the sector.
If the Mercedes wants to be crowned king of the coupes, then this is the car it must beat.
As with its rival, the 318i looks more like a low-slung two-door saloon than a jaw-dropping coupé in the mould of Peugeot’s RCZ or the Audi TT. Still, in racy M Sport specification, it gets a welcome injection of kerb appeal courtesy of a neat bodykit, while the stunning 19-inch alloys on our test car are a £530 option. And while it’s not the most attractive model on the market, the BMW is a grown-up choice that oozes understated class. Open one of the pillarless doors to climb aboard, and you’ll discover that the Coupé shares much of its cabin with other models in the 3 Series line-up. There’s the same attractively styled dash, solid finish and top-notch materials.
It’s only in the rear that the car differs from its saloon and estate stablemates. A pair of deeply sculpted chairs replaces the usual bench, meaning the 318i is a strict four-seater. There’s little to choose between the BMW and Mercedes for space, with occupants in the back of both benefiting from a surprising amount of head and legroom. Plus, the 3 Series offers a useful 440-litre luggage area, which is only 10 litres short of the Mercedes’ capacity.
However, for most coupé owners practicality will take a back seat to performance – and this is one area where the BMW has to give best to its rival. The naturally aspirated 2.0-litre engine serves up less power and torque than the C-Class’s smaller turbo – at 141bhp and 190Nm – resulting in a disappointing display at the test track.
While the Coupe completed the sprint from 0-60mph in a respectable 9.0 seconds, its in-gear acceleration was leisurely. Take a look at our data table (opposite), and you’ll find that it needed 13.3 seconds to cover 50-70mph in top gear – that’s a full 3.2 seconds slower than the C180.
In the real world, this means you have to work the BMW hard to keep up with fast-flowing traffic, while overtaking moves need to be carefully planned. At least the four-cylinder unit is smooth-revving, and it is aided by the positive action of the six-speed manual box. And there’s more good news when you guide the car through a series of bends.
As you would expect from a BMW, the Coupe benefits from meaty steering, sharp responses and strong grip. Yet on anything other than table top-smooth surfaces, the stiff suspension set-up can cause the car to be knocked off line in bends, sapping driver confidence.
Still, there are few complaints about the running costs of the 3 Series. At £29,605, it undercuts the Mercedes by £1,115, while low CO2 emissions of 146g/km make it the more cost-effective company car choice. Factor in its sleek looks, upmarket cabin and focused chassis, and the 318i Coupe is a strong contender for victory.

Chart position: 2WHY: It’s been around a while, but recent revisions mean 3 Series still has the X-factor. Classy looks, an upmarket interior and sharp chassis make it a desirable choice.