Class leader continues to set the benchmark for efficiency 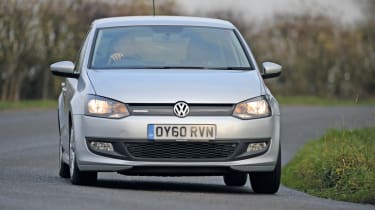 The VW Polo BlueMotion takes some beating for eco credentials. Now in its second generation, the green-themed supermini still sets the standard in this class for fuel efficiency and low emissions.

VW claims 91g/km CO2 emissions and 80.7mpg fuel economy; in contrast, the Kia can manage only 99g/km and 74.3mpg respectively.

Part of the Polo’s fuel-sipping performance can be put down to its aerodynamically tuned bodykit. The faired-in nose, side skirts, tailgate spoiler and 15mm lower ride height help the car slice more cleanly through the air.

Even the standard 15-inch alloy wheels have been designed to cut drag. Yet while these changes give the Polo a sportier look, it can’t quite rival the Rio for visual flair.

Inside, the VW impresses with its solid finish and classy materials, which combine to give an upmarket feel. What’s more, the dashboard is logically laid out and the driving position is spot-on. However, while the cabin is beautifully built, it feels cramped and sparsely equipped when compared to the Kia.

Occupants in the rear get less head and legroom, and you’ll have to pay extra for desirable kit such as an iPod connection and Bluetooth – all of this is standard on the Rio.

Our two contenders are more closely matched when it comes to luggage capacity, as the Polo’s 280-litre load bay trails the Kia’s by just eight litres. And the VW has the upper hand for cubby space, thanks to its deep door bins and large glovebox.

The BlueMotion also steals a march on its rival in terms of straight-line performance. At the test track, it completed the benchmark 0-60mph sprint in 13.2 seconds – a full 1.2 seconds faster than the Rio.

Sadly, the gruff 1.2-litre three-cylinder engine becomes harsh when extended and vibrates uncomfortably at idle, so you’re not encouraged to use this performance advantage.

Our test car also struggled to slow down on the damp surface of our track: it took 63.5 metres to stop from 70mph. The Rio came to a halt 6.1 metres sooner.

On the road, the Polo puts on a more assured display. The handling is safe and predictable, while grip from the low-rolling-resistance tyres is surprisingly strong. At motorway cruising speeds road and wind noise are kept to a minimum, and even the racket from the engine subsides a little. Only the firm ride lets the side down, causing the car to crash uncomfortably into potholes.

However, buyers of these cars will be more concerned with performance at the pumps – and the VW doesn’t disappoint here. Thanks to the aerodynamic tweaks, plus the adoption of the low-rolling-resistance tyres, extra-long gear ratios and more energy-efficient engine components, the VW returned an impressive 51.8mpg in our hands.

However, you’ll need to save all the fuel you can to offset the £1,685 premium the £15,480 Polo commands over the Kia. Add a few options – in an effort to match the Rio’s excellent kit count – and the gap becomes even greater.

The VW still rules the roost for fuel economy, but will the higher price, rough engine and miserly equipment cost it dear in the final reckoning?

Chart position: 2WHY: The original fuel-sipping supermini is a key part of VW’s BlueMotion range. But is Polo still clean and efficient enough to win here?