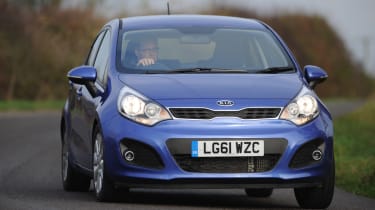 8
Kia is in a rich vein of design form. The Sportage crossover and Picanto city car should have prepared us for the new Rio, but the supermini still has the power to surprise. You could argue that it’s not as eye-catching or pretty as its stablemates, but the car’s neat proportions and muscular stance are attractive and modern.
The ecoDynamics 2 model tested here doesn’t make any styling concessions, either. You can look as long as you like, but you won’t find any aerodynamic aids or specially designed wheels as you do on the Polo. The Kia’s body doesn’t sit closer to the ground to help it cut through the air more effectively, either; the only thing giving the game away is the badge on the tailgate.
Video: watch CarBuyer's video review of the Kia Rio
[[{"type":"media","view_mode":"content_narrow","fid":"68694","attributes":{"alt":"","class":"media-image"}}]]
Climb behind the wheel and the Rio’s eco credentials are even less apparent. In middle-of-the-range 2 trim, it comes with air-con, a USB port, Bluetooth connectivity, a leather-trimmed multifunction steering wheel and six airbags as standard. The Polo gets much less equipment.
It’s not just the number of toys on offer that impresses; the quality of the cabin materials and design is every bit as good. The layout is stylish but functional, the instruments are attractive and clear, and the smart rotary air-con controls and three-spoke steering wheel look great.
Legroom in the back is far better in the Kia. It has a near-flat rear floor and two adults can sit in the rear in comfort. Try this in the VW and you’ll find legs pressed into the front seatbacks. Lift the tailgates of our two contenders and the official measurements suggest they’re evenly matched. The Rio’s boot is only eight litres bigger than the VW’s, at 288 litres with the seats in place.
The Rio extends its advantage out on the road. Its 1.1-litre three-cylinder diesel has a distinctive thrum, but it’s very refined, with none of the vibration evident in its rival. Of course, this is no performance car, but the Kia’s 74bhp output is more than adequate around town. And with a six-speed box instead of the VW’s five-speeder, the car feels more responsive on the open road.
It’s not perfect, though. Standard 16-inch alloy wheels have an impact on the ride, sending jolts into the cabin over potholes and expansion joints. It can thump over uneven surfaces at low speeds, too, although body control is sharper in corners than the Polo’s and the Rio is more fun to drive along winding roads.
The Kia’s dynamic superiority even extends to its braking performance. Where its rival makes do with simple drum brakes at the rear, the Rio has discs all round. This made a difference to the stopping distances we recorded during our tests, with the Kia coming to a halt more quickly and with much less fuss from all speeds.
These cars are more about low running costs than anything else, though – and this is usually where the Volkswagen comes into its own. But the Rio excels here, too. While it emits more CO2 than the Polo, it still sneaks beneath the 100g/km threshold. As a result, both cars are exempt from road tax and the London Congestion Charge.
We couldn’t get close to Kia’s 74.3mpg claimed fuel economy figure, returning 45.6mpg. But bear in mind that this included our performance tests, and also that our car had only around 500 miles on the clock. Once the engine has loosened up its economy should improve, although the VW will always go further on a gallon of fuel.
What impresses most is the way the Rio goes about achieving its economy. Apart from its stop-start system and gearshift indicator, it’s hard to tell it’s an eco special from the driver’s seat. In the VW you’re constantly aware of its extra-long gear ratios and limited low-down torque, but the Kia doesn’t feel hamstrung by its efficient underpinnings.
So the Rio is a clean and economical supermini that’s also good to drive and great to look at. It also has loads of kit, a seven-year warranty and, above all, demands few compromises. As an eco car that will fit into any lifestyle, the Kia is an incredibly appealing choice.

Chart position: 1WHY: We love the new Rio. It looks good, has a practical, high-quality cabin and is attractively priced. New 1.1-litre diesel is frugal, too.