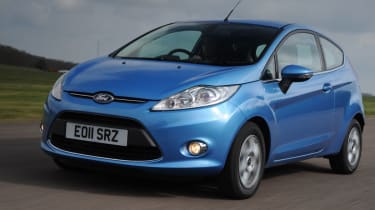 8
It’s been nearly four years since the Ford Fiesta MkVI made its debut, but it shows no signs of slowing down yet. Thanks to its eye-catching design, family-friendly practicality and entertaining driving dynamics, it still sets the class standard.
What’s more, in sleek three-door form, the Ford boasts the sort of head-turning looks normally reserved for sporty coupes.
The Fiesta in our pictures is an ECOnetic model with 14-inch wheels, but the 1.4-litre TDCi Titanium we tested is fitted with smart 16-inch multispoke alloys, privacy glass and extra chrome on the grille. As a result there’s nothing between our cars in the style stakes.
Inside, it’s also a close-run contest. The Ford’s imaginative dashboard grabs the attention more than the Kia’s. Both set-ups are easy to use, but while the Fiesta is solidly built, some of its plastics are a bit low-rent next to those in the classy Kia.
There’s also little to choose between the two in terms of gadgets. Both models boast big-car features such as climate control, Bluetooth and ambient cabin lighting. And while you’ll have to pay £175 for heated seats (standard on the Rio), you get a Quickclear heated windscreen and DAB radio on the Ford.
Despite its three-door bodystyle, this car is a surprisingly practical choice. The front seats slide forward to make getting in the back easier, while the rear cabin has decent head and legroom – although it’s not quite as roomy as the Rio. Also, there isn’t quite as much storage for odds and ends and the Ford’s well shaped 295-litre boot is only fractionally larger than its rival’s.
While it doesn’t give much away to the Kia for practicality, the Fiesta is soundly beaten at the test track. Its 69bhp 1.4-litre diesel puts out 20bhp less than the Rio’s engine. As a result, the Ford took a leisurely 13.9 seconds to complete the 0-60mph sprint – 2.7 seconds slower than its rival.
Yet on the road, it feels just as responsive. A healthy peak torque figure of 160Nm and the well spaced ratios of its slick five-speed manual gearbox help mask its lack of outright performance.Plus, the Fiesta wins out on a twisty back road. No other supermini can match its beautifully judged ride and handling balance.
Well weighted steering and strong grip make this car a joy to drive in challenging corners, while the supple suspension effortlessly and silently soaks up bumps and potholes. It’s refined, too, with surprisingly little road and wind noise. Engine noise only starts to become intrusive at motorway speeds.
So the Ford remains on top form. But there’s a catch. At £15,095, it costs £800 more than the Kia, plus it lacks its rival’s lengthy warranty, great-value servicing pack and strong residuals. Could the reigning class champion be facing a rare road-test defeat?

Chart position: 1WHY: The Ford is our supermini champ and a brilliant all-rounder. It’s stylish, practical and fun. But is it about to lose its crown?