Many rivals have tried and failed to take the Ford Fiesta’s supermini class crown. Can the latest three-door Kia Rio buck the trend? 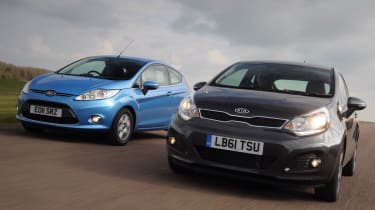 When it comes to style, three doors beat five every time, but supermini buyers are a demanding bunch. Stylish looks alone won’t be enough for the new Kia Rio three-door to clinch victory in its first test: practicality and value are all-important in this class, too.
But Kia can be confident of the strongest possible showing by the Rio, as we’ve put the top-of-the-range 3 model with the economical 1.4 CRDi engine through its paces. It boasts smart new looks, plenty of standard equipment and promises better performance than its rival in this test. And what a rival it is...
The Ford Fiesta is one of the best cars money can buy, but the signs don’t look good for our favourite supermini. The 1.4 TDCi model has less power and standard kit than the Kia, plus its aftersales package isn’t so impressive.
An upset is on the cards, then – but the Ford has been up against it before and come out on top. Will it be capable of seeing off the promising Kia here?

The Kia Rio has once more proven it’s a force to be reckoned with. But has it done enough to finally knock the Fiesta off its place at the top?

The three-door Rio certainly looks the part, plus it has a roomy cabin and is well built. What’s more, in range-topping 3 spec, it comes crammed with enough hi-tech standard kit to make drivers of top-notch executive saloons jealous. Factor in the great-value price, low running costs and brilliant aftersales package, and we could understand anyone choosing the Kia as a stylish and affordable runaround.

Yet there’s no escaping the car’s dynamic flaws. The sporty 3’s uncomfortable ride is a real problem on the UK’s bumpy and potholed roads. Our testers struggled to live with this during our time with car.

As a result, the Ford Fiesta seals victory by the narrowest of margins. It’s more expensive to buy, but it only takes a short drive to understand why it’s worth every extra penny. The Fiesta’s mixture of refinement, comfort and agility is a match for cars from the class above, while the sharp looks and bold cabin help it stand out from the crowd. What’s more, it’s cheap to run in 1.4-litre diesel form.

The Fiesta wins, but the Rio could turn the tables with just a few suspension tweaks. Over to you, Kia…

The Fiesta takes victory, but emerges from the contest with a bloody nose. Its driving dynamics are still head and shoulders above rivals, while its slick looks continue to turn heads. It’s also cheap to run, practical and solidly built. The 1.4-litre diesel is probably the weakest engine in the range, but it’s frugal and sufficiently powerful.

Once again, the Rio comes agonisingly close to a road test win. It makes a lot of sense financially, plus it looks good and boasts a roomy interior. Yet the Kia’s crashy ride would be unacceptable even for a hot hatch. Models with smaller wheels are more forgiving, but a few minor changes would put the flagship 3 on the top step of the podium.