Previously badged VR7, the Kia Rio SR7 is a special edition supermini that adds loads of kit for not much cash 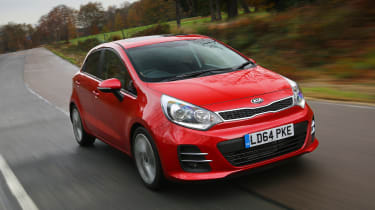 The Kia Rio SR7 took over from the special edition VR7 when the supermini was facelifted in late 2014. It retains the old car’s impressive kit list, and undercuts mainstream rivals for equipment – with essentials such as air-con, alloys and parking sensors all coming as standard. Opt for the 1.1-litre diesel and you’ll bag yourself a stylish little car that’ll cost you pennies to run.

Like much of the Kia range, the Rio lineup – badged 1, 2, 3 and 4 – is straightforward and easy to understand. Available with three or five doors, as well as a choice of small petrol and diesel engines, the Rio rivals cars like the Ford Fiesta and Volkswagen Polo, but adds a seven-year, 100,000-mile warranty into the mix.

Sliding in above the entry-level 1 specification but below the mid-spec 2, the SR7 adds desirable kit such as 15-inch alloy wheels, tinted windows, automatic headlights and reversing sensors. Inside, buyers get a sliding front armrest, leather trimmed steering wheel and a cooled glovebox, adding to the upmarket feel. 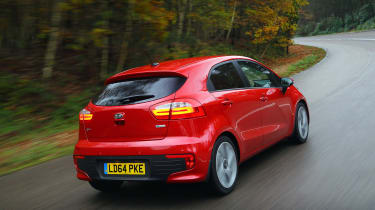 SR7 prices start from less than £11,000, commanding a premium of around £700 over the basic 1. You get air-con as standard though, which isn’t available on entry-level cars unless you spec the ‘Air’ trim. This will cost you an extra £600 – making the £700 SR7 surcharge look like incredible value.

On the three-door, SR7 buyers are limited to the slightly sluggish 1.25-litre petrol engine. Mated to a five-speed manual gearbox, it’ll do 0-60mph in 12.9 seconds and return 56.5mpg – while emissions of 115g/km mean you’ll pay £30 in annual road tax.

We prefer the 1.1-litre CRDI diesel – but in SR7 trim, this engine is only available on the five-door Rio. This shouldn’t put you off though, as the increased practicality and hugely improved running costs easily justify the premium. 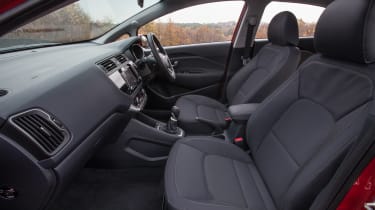 The SR7 diesel will do 78.5mpg and return a tax-free 94g/km of CO2. It’s worth noting however, that the SR7 five-door is also available with the 1.25-litre petrol engine too.

On the road, the Rio feels much more grown up than Kias of old, but it’s still not as fun to drive as a Ford Fiesta. The six-speed manual gearbox on the 1.1-litre diesel means it’s more refined at higher speeds than the petrol, and will return far superior miles per gallon. If you want the highest quality supermini then the Volkswagen Polo is our pick, but if value for money and standard equipment are key, then the Kia Rio SR7 is one of our top small car choices.