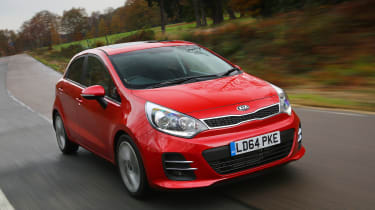 The Kia Rio still has plenty of appealing features, including a high-quality cabin, seven-year warranty and a comfortable ride, but rival superminis are ahead in a few key areas. Kia is planning to release a new 1.0-litre three-cylinder turbo petrol soon, which could merit an extra star, but for now, this engine and spec is merely adequate in a class where adequate isn’t quite enough.

With an influx of highly important new superminis appearing in 2015, Kia has given its Rio a minor facelift to ensure it isn’t left behind. We drove the 1.4-litre petrol model in mid-range 2 spec to see if it has upped its game.

On the outside, the four-year-old Rio’s looks remain fresh and are aided by subtle bumper alterations that came with the revamp. Inside, meanwhile, the roomy cabin doesn’t change too dramatically, but it is a little more upmarket. Material and trim quality have improved, most noticeably with the gloss-black dashboard inserts, and while you won’t be bowled over by new technology or design flair, it’s easy on the eye, intuitive to operate and feels solidly built. 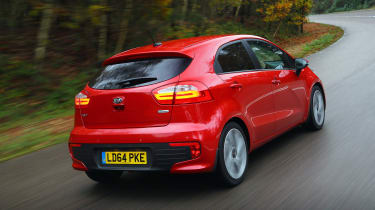 Our model lacked the new seven-inch touchscreen sat-nav included on higher-spec cars. The standard radio (now with DAB) is user-friendly, yet the display looks dated.

On the road, it’s clear that the Rio is biased towards comfort rather than taking the Ford Fiesta head-on for handling. That’s no bad thing, as you get a refined, smooth ride around town and quietness at higher speeds. Body control is adequate, but it’s a shame that the steering is still vague.

The 107bhp 1.4-litre petrol is carried over from the old model, but now gets stop/start as standard. With six gears, it’s reasonably flexible for a non-turbo unit, yet it gives away its modest 136Nm torque output at higher speeds. You need to rev the Kia hard to extract its best performance, and doing so exposes thrashiness at higher revs. Take it easy, however, and it’s smooth and refined. 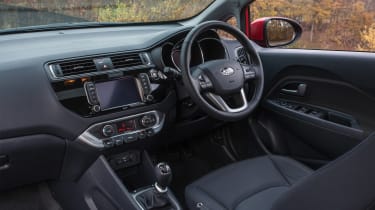 The 1.0-litre three-cylinder turbo units in the Vauxhall Corsa and Fiesta are more relaxing, gutsier and cheaper to tax, plus they’d easily match our 43mpg test economy.

The problem is, the Rio isn’t quite the bargain it once was. The Hyundai i20 offers marginally more kit for less, and you can have a mid-spec Skoda Fabia with its clever MirrorLink touchscreen and punchy TSI petrol for the same money. A turbo petrol unit is on the horizon, but for now, the Rio makes more sense in cheaper SR7 spec with the three-cylinder diesel engine.