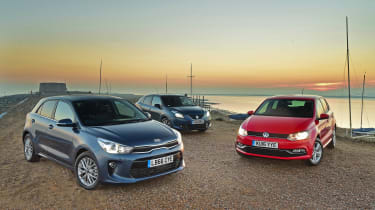 The supermini class is more crowded than ever, with the past 12 months welcoming a host of all-new or facelifted models. So the latest Kia Rio is going to have to be at the top of its game if it’s to stand any chance of toppling the established pecking order.

Kia is certainly leaving no stone unturned with this clean-sheet design, which is bigger than before and features the latest tech. It’s also powered by the recently launched 1.0-litre turbo three-cylinder petrol engine that was first seen in the larger Cee’d hatchback. The brand is claiming the newcomer is more grown-up than before as well, with a greater emphasis on refinement and quality. 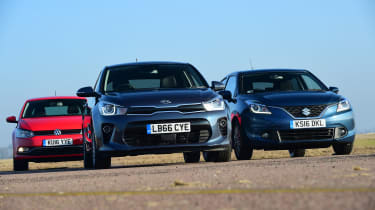 To test this, we’ve brought the Rio face-to-face with our current class favourite, the Volkswagen Polo. Smart, classy, good to drive and cost-effective to run, the VW sets the bar high for any pretender to the small car crown.

Completing our welcoming committee is the Suzuki Baleno, which rivals the Kia for space and kit, and also comes with a value-for-money price tag. So which of our trio will take the honours in this closely fought encounter? 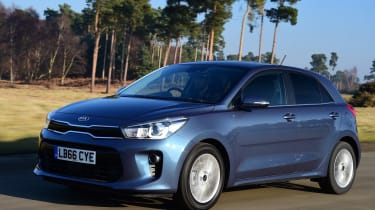 The pace of development is clearly relentless at Kia, with the fourth-generation Rio making its debut just a decade and a half or so after the original debuted. There’s a new platform and engines under the skin, while the newcomer is only available in five-door form this time around and there are three trims to choose from. Here we test the top-spec 3, powered by the 99bhp 1.0-litre turbo petrol, which costs £16,295

The last Rio served up a sensible and solid driving experience, and the new car hasn’t strayed far from this template. But the three-cylinder petrol is an eager and relatively refined performer, and thanks to some well chosen gear ratios it was the quickest from 0-60mph, with a surprisingly fast time of 9.2 seconds. However, the tables were turned during our in-gear tests, where the Kia was fractionally slower than both rivals.

In the real world these differences are hard to detect, and the Rio’s thrummy engine pulls strongly from 1,500rpm – although in the higher gears there’s some hesitation from the unit when accelerating from low revs. Either way, the Kia has no trouble keeping pace with its rivals, and the five-speed box is slicker than the vague Baleno’s.

Turn into a corner and you’ll discover the light and direct steering delivers nothing in the way of feedback. This characteristic masks otherwise safe and predictable handling that’s backed by decent grip. It’s not as agile as the Suzuki or as composed as the VW, but the Kia is easy and undemanding to drive.

It’s also fairly refined, with engine and wind noise well suppressed at a cruise. The same can’t be said for tyre roar, which is intrusive on coarse surfaces. Worse still is the noisy and inconsistent ride, which copes well with smooth surfaces but transmits too many thumps and jolts into the cabin over poor tarmac.

Testers' notes: “While rivals have given their superminis twin-clutch or CVT autos, Kia has stuck with a four-speed torque convertor auto. It’s only available in 1.4 2 guise and emits 140g/km. ” 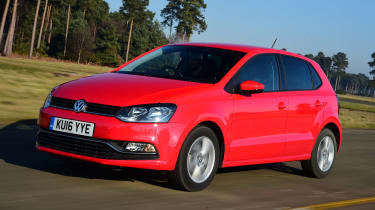 The Volkswagen Polo has been busy recently. As our favourite supermini, the German model has faced a barrage of new arrivals looking to steal its small car crown. With a blend of refinement, quality, practicality and precision, it’s got all the bases covered, and here we sample it in £15,090 1.2 TSI Match Edition guise.

A facelift in 2015 helped keep the Polo competitive and added a new 1.0-litre three-cylinder turbo petrol engine. However, it’s this tried-and-tested 1.2 TSI 90 model that still proves to be popular with buyers.

With just 89bhp and 160Nm of torque, the four-cylinder unit is down on power compared with the smaller units in the Rio and Baleno. At the track, though, the eager engine was only at a real disadvantage during the 0-60mph sprint, where the VW was slowest with a time of 9.9 seconds. Yet while it continued to trail the Suzuki during our in-gear tests, it had the upper hand over the heavier Kia, narrowly beating it during all the 30-50mph and 50-70mph increments.

Away from the track, the Polo feels every bit as nippy as its rivals, plus its engine is smoother and quieter. In combination with its more mechanically accurate gearbox, it makes it easier and more satisfying to access the Polo’s performance potential.

And it’s not just the powertrain that sets the VW apart. Even though the underpinnings aren’t cutting edge, they’ve been thoroughly developed so that the chassis delivers a quieter and more comfortable ride than both the Kia and the Suzuki.

Not only does the damping round off nasty bumps more effectively, there’s also greater control, so the faster you drive, the more impressive the Polo is. Body roll is well checked, with the suspension absorbing bumps effectively and helping to ensure passengers aren’t as upset by road imperfections. Confidence is further boosted by the progressive and naturally weighted steering that allows you to place the car accurately and make the most of the impressive grip. It’s not quite as much fun as a Ford Fiesta, but the VW’s depth of ability is impressive.

Testers' notes: “The Polo’s 1.2-litre four-cylinder is out of step with the triples in its rivals here. However, VW has an efficient 1.0 three-cylinder with 94bhp or 108bhp that’s set to replace the 1.2.” 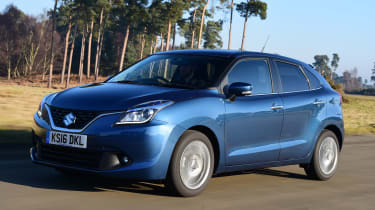 Suzuki’s Baleno supermini is packed with showroom appeal, as it offers space and kit at a bargain price. Just two engines and a pair of trims are available, so we’ve chosen the decent-value and well equipped £14,499 Baleno SZ5 1.0 Boosterjet. Is its blend of value and versatility enough to win here?

With 109bhp and 170Nm of torque on offer and a low kerbweight, the Baleno put on a strong show at the track. This was particularly true during our in-gear tests, where the Suzuki sprinted from 50-70mph in fifth in 9.2 seconds, which was 2.7 seconds and 1.7 seconds faster than the Kia and VW respectively. The result was the same during the 30-50mph increments, where the Suzuki pulled out a healthy advantage.

The Baleno had to give best to the Kia in the dash from 0-60mph, but a time of 9.5 seconds is brisk for a supermini. Head out into the real world and the Suzuki has no problem keeping up with fast flowing traffic, while overtaking is easy enough. The only performance black mark is reserved for the five-speed gearbox, which has a rubbery and indistinct action.

Elsewhere, the Suzuki benefits from a compliant ride thanks to standard 16-inch wheels and acceptable body control, meaning it feels taut and composed on the road. Like the Swift, the car handles nicely enough, once again helped by a low kerbweight that allows it to change direction quickly and accurately. And while the steering doesn’t self-centre around the straight ahead position, it’s accurate and direct.

Despite its lack of mass, the Suzuki rides well, filtering out bumps with a finesse that some cars costing twice as much can’t match. It’s also reasonably refined – although like the Rio it can’t match the quiet and composed Polo for long-distance comfort. 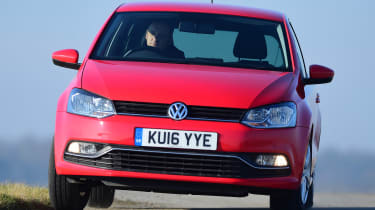 It’s due for replacement later this year, but the Polo still sets the supermini standard. Refined, good to drive, cost-effective to run, well finished and practical enough, it covers all the bases. It can’t match its rivals here for standard equipment, but it gets all the essentials, plus its price advantage over the Kia means you can spend some of the savings on some well chosen options. 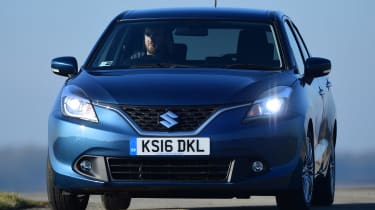 If you’re looking for the most bang for your buck, then the Baleno is hard to ignore. It’s not that stylish, while the interior design and materials leave a lot to be desired, but it’s very spacious and has a kit list that would make an executive saloon blush. It delivers the strongest performance and boasts agile handling. The fact it’s the cheapest car to buy is the cherry on the cake. 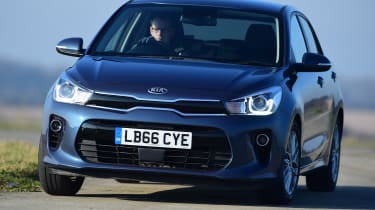 In many respects the Rio is a step backward over its predecessor. To our eyes it doesn’t look as attractive, while the interior is built from materials that wouldn’t look out of place in a budget city car. It’s also expensive. On the plus side, it’s well equipped, spacious and undemanding to drive. But in a class as competitive as this, the new Kia doesn’t do enough to stand out from the crowd. 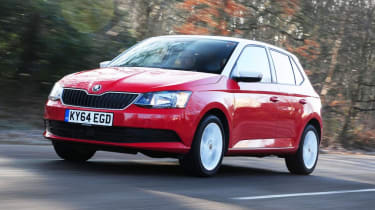 The spacious Skoda Fabia rivals the Rio for practicality, plus its VW-sourced four-cylinder engine is on par with the Baleno for power. And while quality isn’t quite up to Polo standards, it feels more upmarket than both the Kia and Suzuki. 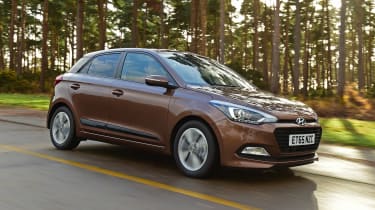 Under the skin, the i20 features the same platform and engine as the Rio. There’s little to separate the two for driving dynamics and practicality, but the Hyundai has a classier cabin than its sister car and undercuts it on price.