The new Kia Rio will be more popular with petrol power, but how does the 1.4 CRDI diesel drive? 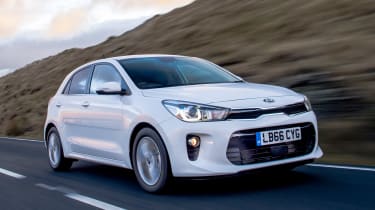 While the new Kia Rio gets the basics right, it doesn’t do enough to stand out in the competitive supermini sector. We take issue with the unexciting design, mixed cabin quality and so-so ride and refinement – things that could be overlooked if there weren’t so many talented alternatives out there. This diesel might sip fuel, but the 1.0-litre turbo petrol would be our choice in the range.

We’ve already driven the new Kia Rio in its petrol form, which is predicted to be the best-seller in the range. We concluded that while it was a capable if conservative supermini, the overall package left us a little cold.

However, a change in spec can often make the world of difference in a modern car – so here we’re trying the most powerful Kia Rio diesel for the first time to see if the more frugal car can deliver.

This 1.4 CRDI isn’t expected to be the volume seller in the range – that honour goes to the strong and refined turbo petrols. Still, the diesel will surely appeal to private or company car buyers who intend to rack up big miles in their supermini. For them, it should prove very cheap to run, as the base 76bhp unit promises over 80mpg on the claimed combined cycle and emits just 92g/km of CO2. 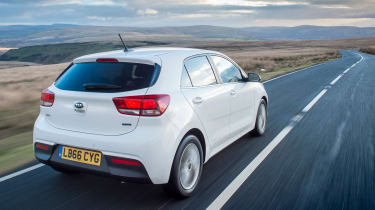 We’ve got the more powerful version of the same engine here, however. Producing 13bhp more but the same 240Nm of torque, claimed fuel economy drops to a still respectable 74.3mpg, while CO2 rises to 98g/km. Despite the modest power increase, nearly two seconds is shaved off the 0-62mph time, too.

It behaves like a traditional diesel in the sense that it picks up quickly from just under 1,500rpm, giving the Rio a decent amount of in-gear punch. Unfortunately, it’s also like a traditional diesel when you stray above 3,000rpm, where the torque dies off abruptly and it promptly runs out of puff. There’s also noticeable clatter at the top of the rev band, although things are mostly subdued when you’re taking it easy.

It’s much more refined than the 1.4-litre diesel found in the Volkswagen Polo and Skoda Fabia, but companies like Citroen and Mazda will sell you a similarly frugal diesel supermini that’s more willing to rev. At least the six-speed manual gearbox lets you keep the Rio in its narrow power band without too much fuss. Regardless, if it’s flexibility and refinement you want, the 1.0-litre turbo petrol offers that plus pretty decent economy.

You don’t really feel the extra weight of the diesel engine, though. Push really hard in the bends and you’ll notice it isn’t quite as keen to turn in, but most of the time it’s as composed and predictable as the petrol. The steering is direct, but lacking in feel, though body control is adequate.

Our main dynamic complaint concerns the ride, however, which is fidgety and occasionally harsh on mixed British roads. There’s quite a lot of suspension noise over potholes, too, while road noise is more noticeable than it is in cars like the VW Polo. It means the Rio isn’t ultimately as well rounded as it should be given it’s priced to compete with the class best. 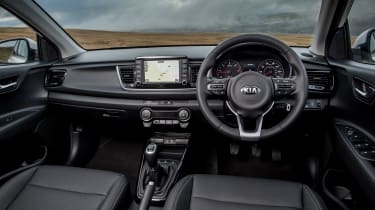 The Kia’s interior is solid and well laid-out, yet the hard and scratchy plastics that grace the doors and dash top let down what is otherwise a smart and spacious cabin.

Our 3-spec model was identical to that of the turbo petrol we’ve tried already, and comes with loads of kit including a seven-inch touchscreen sat-nav with Android Auto and Apple CarPlay. Heated front seats and a heated steering wheel, man-made leather upholstery and climate control all feature too. The standard-fit 16-inch alloys fail to lift the rather restrained and plain exterior, however.