Can the new three-door Kia Rio topple the big-selling Fiesta? 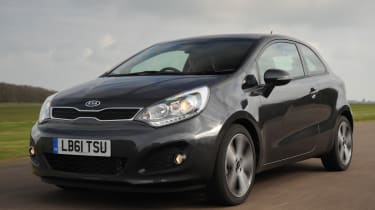 8
The Kia Rio has come extremely close to topping the supermini class in recent road tests. Yet each time this pair have met, the newcomer has had to play second fiddle to the more established Ford Fiesta.
While it looks good, comes packed with standard kit and is backed by Kia’s brilliant seven-year warranty, the Rio lacks the Fiesta’s more rounded appeal and sparkling driving dynamics. However, could the new three-door version finally turn the tables?
It certainly has the necessary kerb appeal. Kia’s designers have worked hard to give this model a sportier look than the practical five-door version. What’s more, our test car’s top-of-the-range 3 spec adds attractive 17-inch alloys and distinctive LED bulbs in the front and rear lights. As result, the Kia looks more like a hot hatch than a humble supermini.
Climb aboard and you’ll find the interior is almost identical to the five-door’s. For instance, the dashboard is carried over unchanged, which means you get the same clear layout and chunky switchgear. And while the Rio’s layout is not as slickly styled as the Fiesta’s, there’s nothing wrong with the build quality or standard of materials used. It’s stuffed with kit, too. Our 3 spec car had heated seats and rear parking sensors – you’ll pay an extra £450 to add these items to the Fiesta.
The Kia also steals a march on the Ford for space. Rear-seat passengers get more head and legroom, plus the cabin has lots of useful storage cubbies, including deep door bins and a large, air-conditioned glovebox. However, the Kia’s well shaped 288-litre boot isn’t quite as big as the Fiesta’s 295-litre space.
Against the clock, the Rio holds all the aces, as its 89bhp 1.4-litre engine is more powerful than the Fiesta’s 69bhp diesel. It’s also mated to a six-speed gearbox, whereas the Ford has to make do with a five-speed transmission.
As a result, the Kia needed only 11.2 seconds to complete the 0-60mph sprint – 2.7 seconds quicker than the Ford. It was just as good in the mid-range, going from 30-50mph in third in 4.8 seconds – that’s 2.8 seconds faster.
Yet the differences between the two are hard to detect on public roads. Although the Rio’s engine is smooth and refined, a tall sixth gear means you often have to change down for steep motorway inclines.
Given its racy styling, it’s no surprise to find this car is an agile performer on twisty back roads. The electrically assisted steering is well weighted, there’s plenty of grip from the wide tyres and body roll is kept in check. But the price is a stiff and uncomfortable ride.
The Kia crashes violently into potholes and mid-corner bumps throw it off line. Things settle down on the motorway, but it can’t compete with the Fiesta over bumpy roads.
At least owners can take comfort in the Rio’s great-value price and lower running costs.
At £14,295, it undercuts the Ford by £800, while stronger residuals of 43.7 per cent mean it’ll be worth more when it’s time to sell. It’s also available with an excellent prepaid service package – three years’ maintenance for only £259 – and has a seven-year warranty.
So, has the three-door Kia Rio finally done enough to topple the mighty Fiesta?

Chart position: 2WHY: On paper, the Kia should have this one sewn up. It’s cheaper than the Ford, better equipped and should be worth more when you sell it on.