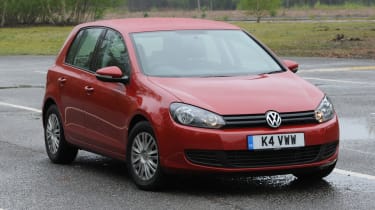 8
For how long can the VW Golf hold out at the top of the family hatchback tree? This big seller has ruled the roost since the MkVI version was launched in 2008, but in recent months new rivals have arrived to challenge its dominance.
With its upmarket image, quality cabin and low running costs, this is still the car to beat. However, the VW struggles to match its rivals here for visual appeal, as its sober-suited lines look bland next to the sleek Cee’d and angular i30. Yet the Golf is still a handsome and well proportioned car and there’s no denying the draw of the VW badge.
Advertisement - Article continues below
Our pictures show an entry-level S, but our Match test car had extra glamour thanks to its standard 16-inch alloy wheels and extra chrome trim around the front grille.
Inside, it’s the same low-key story. The Golf’s slab-fronted dashboard lacks the style of the other cars’, but it still leads the way for quality. Soft-touch materials, slick switchgear and solid construction make this feel like the interior of a much more expensive car.
There’s plenty of standard equipment, too. Bluetooth, MP3 connectivity and cruise control all feature, as do a leather-trimmed steering wheel and parking sensors.
You’re also unlikely to feel short-changed by the amount of space. Occupants in the back get fractionally more leg and headroom than in the other two cars, plus there’s loads of useful storage cubbies. And while the Golf’s 350-litre boot trails the Kia’s by 30 litres, it’s well shaped and can be expanded to 1,305 litres by folding the rear seats flat.
Advertisement
Advertisement - Article continues below
On paper, the VW doesn’t have what it takes to match its rivals’ performance. The familiar 1.6-litre diesel engine develops only 104bhp – that’s 22bhp less than the Kia and Hyundai. The Golf is further hobbled by a five-speed manual gearbox that’s been tuned for efficiency rather than performance.
Advertisement - Article continues below
Yet at the track, it completed the 0-60mph sprint in just 10.8 seconds – two tenths faster than the Cee’d. In the real world, its diesel engine feels every bit as responsive and muscular as those in its newer rivals here – although it’s not quite as refined as they are, particularly at idle.
Tackling a series of corners proves the Golf is the best-handling car here. A combination of well weighted controls, strong grip and excellent body control makes it feel composed and capable, while a supple ride and quiet cabin add to its narrow advantage on the road.
However, this dynamic prowess comes at a price. At £20,445, it’s the most expensive model of our trio to buy, while CO2 emissions of 107g/km make it the costliest company car choice.
Still, strong residuals of 46 per cent and excellent fuel economy of 49.1mpg will help owners claw back the extra outlay. So, has the Golf done enough to stay on top?

Chart position: 1WHY: The car the Kia must beat. Hugely talented Golf has been on sale since 2008, and is still the benchmark in competitive class.